All the 18 players in the team’s camp took part in the game which took place on a beach.

A video of the players participating in the Foot- Volleyball match was posted on the official Twitter handle of the Super Eagles with a short message at the top. 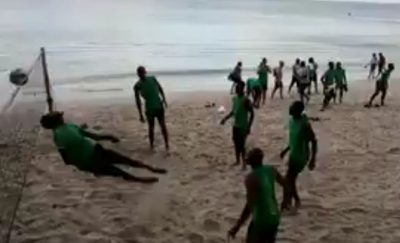 Gernot Rohr’s men’s buildup to the game has been marred by withdrawal of some of his key stars to due to injuries.

Captain of the team, John Mikel Obi opted out the team due to fitness concern before the squad list for the game was released.

The trio of William Troost-Ekong, Alex Iwobi and Ola Aina have all been ruled out of the game as a result of injuries.

The Super Eagles will look to bag all three points against the Pirates on Saturday after losing their first game 2-0 at home to South Africa in June 2017.