By Mumini Alao:
I KNOW that I speak the minds of most Nigerians when I say that all that we expect from the Super Eagles in the first leg of their World Cup qualifying double-header against Cameroun on Friday, September 1 is nothing short of victory.
Most people that I have spoken to say they really don’t care about coach Gernot Rohr’s team selection, his tactical formation or how well or badly the Eagles played in Uyo provided they won the game “even by half a goal,” if there was anything like that. The mantra has been, “Super Eagles, Just Win!” I cannot agree more.
However, it’s not out of place to still speculate on the players best suited to engineer Nigeria’s victory and how best to overcome the dreaded Lions.
Completesportsnigeria.com deputy editor Nurudeen Obalola (now in Yaoundé) has done an excellent job in his article with the title “There’s more to Cameroun than just brute strength” (See Nurudeen’s column on the home page).
There’s also an expose by Soccertalk fan Tunde Ogunnoiki on why Cameroun are so difficult to beat (see below). Even for me, Tunde’s narrative is a revelation.
Nurudeen and Tunde’s articles may elicit more worry than cheer for the average Super Eagles fan about the onerous task ahead on Friday. But rather than worry, we should simply show more support for our national team in whatever way we can. Fans at the Godswill Akpabio stadium must be the Eagles 12th man by cheering them from start to finish. The rest of us should pray and believe.
On my part, I am wearing my cap of Positive Thinking and expecting the indefatigable “Nigerian Spirit” in captain Mikel Obi and his troops to shine through. Last week, I admitted in this column that the Eagles were the underdogs against the Lions, but I still BELIEVE that the Eagles will win.
Clearly, Victor Moses running at Cameroun with the ball at his feet, carries the biggest threat in the Eagles attack. But our match hero may yet be the unpredictable Ahmed Musa!
As usual, Musa has been blowing hot and cold in the new season at Leicester City, scoring twice in a Cup game, then getting benched last weekend when Leicester lost to Manchester United in the English Premier League. He may not even make it into Rohr’s starting line-up against Cameroun. But, even as a substitute, I have a feeling that his pace could prove decisive if he delivers his final balls accurately.
Between Moses and Musa lies our match winner as the Eagles pounce to devour the Lions for Sallah meat on Sallah day. Good luck, Nigeria! 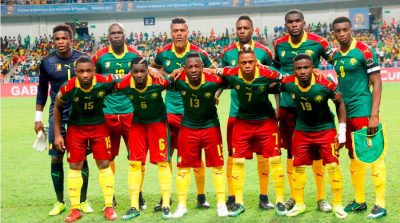 Cameroon’s Secret Exposed!
By Tunde Ogunnoiki:
THE Indomitable Lions clash with Nigeria this weekend brings to mind, some fascinating recollections of Cameroonian teams’ exploits. Their ability to secure victory on foreign, often hostile grounds has always amazed many football lovers. Indeed the remarkable performances of Canon Sportive and Tonnere in African Clubs competitions were precursors of the national team’s domination of the continent.
Surely one of the most ruthless of these fearless feats on a foreign soil occurred in 2002. At the semi final stage of the Africa Cup of Nations, the Indomitable Lions encountered the host team, the Malian Eagles. Before commencement of the match, former goalkeeper Thomas Nkono, at that period, a member of the Cameroonian technical crew, walked around the pitch. In spite of his fame in virtually all African stadia, he was pelted with all manner of missiles by the crowd and had to flee quickly to the dressing room. The Cameroonian players took note of the disgrace meted on Nkono and proceeded to inflict a comprehensive 5-0 whipping on the host nation before the very eyes of their rude fans.
The secret of such eye catching results was revealed to me in 1981 when Stationery Stores confronted Union Douala in Yaounde during the first leg of the African Cup Winners Cup final. The amazing performance of Tarila Okorowanta was ably complemented by goalkeeper Peter Rufai when he caught Cameroun national captain Rene Ndjeya”s penalty kick. Even Cameroonian President Ahmadou Ahidjo sprang to his feet in the presidential box in amazement.
After the scoreless match, a group of Cameroonian youngsters, numbering about eight (8) came to the Nigerian supporters begging for Stores souvenirs such as scarf, caps etc. Extremely joyous at the wonderful result, I engaged the boys in the following conversation in French.
Me: “It is all over for Union Douala in the return leg in Lagos”.
One of them replied: “We shall win in Lagos”.
Me: “Impossible!”
This time, all of them in unison replied “impossible” N’est pas Cameroonians (“impossible” is not a Cameroonian word).
Sadly enough, their utterance was proved prophetic two weeks later. Before the very eyes of the vociferous Stores supporters, Union Douala won 2-1 in Lagos!
The Lesson? From infancy, Cameroonians are indoctrinated that no obstacle is insurmountable. IT IS A NATIONAL MANTRA. This explains why their teams, both at club and national levels conquer hostile environments and succeed against all odds.
On Friday, September 1, 2017, the Super Eagles players must keep in mind that they will face an opponent SUICIDALLY DETERMINED to win the match. The Eagles’ psychologists and technical crew must not believe the Cameroonian coach who said he would be satisfied with four of the six points from both matches. Such a result will be of no use to the Lions as it will still leave Nigeria on seven points with Cameroon on six points. Therefore, Nigeria can still qualify by winning her two remaining matches.
Cameroon will strive to win in Uyo. It is in their DNA to believe that it is possible. Fortunately, we have a team that can beat Cameroon on Friday, but the Super Eagles must come, suitably prepared for a real war.