Following the Super Eagles’  2-1 defeat to England in Saturday’s friendly at Wembley Stadium, Completesportsnigeria.com‘s JAMES AGBEREBI makes his observations from the game…

– POOR COMMUNICATION ON THE PART OF THE SUPER EAGLES PLAYERS

One very important aspect in football is communication among teammates. But against England, the Super Eagles players showed they need to learn a lot in that aspect.

On two occasions the Super Eagles players clashed heads against each other which could have been disastrous.

In the first half, Leon Balogun collided with Joel Obi in a needless head collision which could have been costly.

And in the second half, Kenneth Omeruo and Oghenekaro Etebo had a clash of heads.

This is one area the players must address before going to the World Cup because failure to do so will spell doom for the Super Eagles.

It is evident the Super Eagles have not come to grips when it comes to dealing with set pieces.

Aside from Gary Cahill’s header which broke the deadlock, England went close on different occasions.

Eric Dier, Marcus Rashford and Kevin Trippier went close for England but were unlucky not to hit target.

The Super Eagles technical crew must look into this area if not it would be exploited by smart teams at the World Cup. 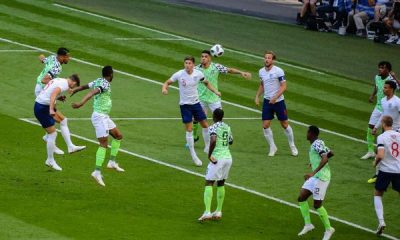 – POOR START BY THE SUPER EAGLES

If there is one thing the Super Eagles must look at critically, it is the issue of starting poor in games.

Their shaky start led to England taking an early lead which also led to the second goal.

Though they bounced back in the second half, they cannot afford to do that at the World Cup or else their opponents would have been out of sight by the time the Eagles wake up.

The Super Eagles struggled in the first half because the midfield did not click.

The midfield trio of Mikel Obi, Ogenyi Onazi and Joel Obi could not contain the England midfield.

Due to their struggle, the forwards were starved of any meaningful supplies while the defence was under constant pressure as a result of lack of protection.

The absence of Wilfred Ndidi was felt as Onazi and Joel Obi failed to mark runners which worried the Eagles back line.

The second half response by Gernot Rohr brought sanity in the midfield which led to an improved performance.

Though he could be blamed for Harry Kane’s goal, Francis Uzoho showed he is learning fast.

He made some good saves and did well enough to come out and either catch or punch away dangerous crosses, making use of his tall frame.

The friendly game against Czech Republic on Wednesday is another opportunity for him to show he is ready for the World Cup. 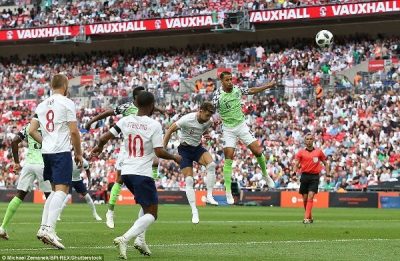 It was obvious the Super Eagles struggled in the first half which saw England deservedly go 2-0 up.

The likes of Shehu Abdullahi, Ogenyi Onazi, Joel Obi were poor in the first half which led to the poor first half display.

But before the start of the second half, Rohr brought in John Ogu, Oghenekaro Etebo, Tyronne Ebuehi and Kenneth Omeruo which totally changed the complexion of the game.

This is a clear indication that Rohr reads the game very well and knows when to make changes.