The Super Eagles have already qualified for the Russia 2018 World Cup but Zambia’s Chipolopolo made them earn the ticket the hard way on Saturday in Uyo. I was in Uyo for the match and here are some of my observations… 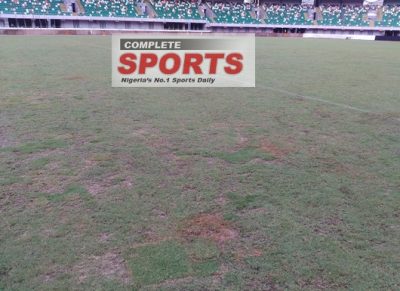 The Godswill Akpabio Stadium pitch the night before Nigeria vs Zambia.

This will be quickly swept under the carpet since the Super Eagles won and qualified for the World Cup on Saturday, but the state of the Godswill Akpabio Stadium pitch is embarrassing.
It is baffling that for such a beautiful stadium, one of the most important components, the pitch where the main action takes place, is allowed to be in such terrible state. Imagine having a beautiful, very expensive phone with a badly cracked screen.

The night before the match, groundsmen were still working on the pitch, desperately trying to cover up up the many sandy, uneven patches. They apparently did not make much progress as the pitch was still in a sorry state on matchday despite their attempts at last-minute ‘cosmetic surgery’.

It might not be an excuse for the Super Eagles’ struggles against Zambia, but the pitch affected play with the sometimes weird bounce of the ball making the easiest task at times very difficult.
The Akwa Ibom State government should spare no cost in resurfacing and properly maintaining the pitch if they want to continue hosting the Super Eagles. If not, the pitch will one day cost Nigeria big.

MIKEL AGU NOT READY YET

For the second game running Mikel Agu was the first choice midfielder off the bench for the Super Eagles. For the second game running, Mikel Agu had a stinker.
The Bursaspor midfielder was so shockingly poor on Saturday that some people in the press tribune joked that the Eagles were playing ‘short one’, street football slang for playing with one man fewer than your opponents.

Agu offered nothing when he replaced the injured Ogenyi Onazi in the first half, misplacing even two-yard passes and not doing much in breaking up play. Agu’s first touch was so poor that he lost the ball almost every time he received it. His terrible first touch did not only put him in trouble (it led him to get an unnecessary yellow card), it also put his teammates under pressure. It would be nice to see his pass completion statistics.

He was almost as bad when he came on for Mikel Obi in the second half against Cameroon in Yaounde in September, as the entire team struggled to keep off the roaring Lions who were desperate to win their first game in the series.

Perhaps there is something that Gernot Rohr sees in Agu that some of us cannot, but the young man has shown that, at least for now, he should not have an edge over the likes of John Ogu and the proven Oghenekaro Etebo in the midfield pecking order.

Rohr defended Agu’s shocking performance afterwards, but even the German must know deep down that it was indefensible.

Surely, Agu is naturally talented so it might have been nerves. He does not appear ready for the Super Eagles.

It might be a tad early to wax lyrical about Ola Aina, but the Hull City defender did just about enough on Saturday to show he can at least be a good left-back option.

Unlike the nervous, error-prone Agu, Aina was composed when defending and a great outlet for the team in attack. Indeed, the 21-year-old, who is on loan at Hull City from Chelsea, would have had an assist if

Victor Moses had buried his intelligent cut-back as the Eagles sought the ‘insurance goal’.

Aina might have played for just 10 or so minutes after coming on for the injured Elderson Echiejile, the youngster was so good that Rohr had no need to defend him at the post-match press conference. Instead, the coach praised Aina, who might just be the solution to the left-back problem.

Match after match the complaints have remained largely the same. And nobody seems to care enough to do anything about it.

Working as a journalist at the Godswill Akpabio Stadium is a nightmare. The stadium does not provide wifi services, yet you cannot use your own internet to work. About an hour to kick-off on Saturday, it became a huge struggle to get any kind of internet service. Your network did not matter. None worked. I tried my Airtel and 9Moblie and my colleague Johnny Edward’s MTN. It was either no signal or extremely weak signal with which you could not even send the simplest WhatsApp message.

Sadly, this has been happening since 2014 when the stadium started hosting big Super Eagles matches. Yet, in spite of the very loud complaints, absolutely nothing has been done. It is as if the state government is telling journalists to go to hell.

Apparently, the NFF are happy about the situation. Because if they are not, they would have sorted it out their own way long ago. One of such ways would have been to insist on clear internet access as one of the conditions for Akwa Ibom to host Super Eagles games.

As if not having internet access during the game is not enough torture, the post-match press conference at the Godswill Akpabio Stadium has always been a big mess. In the past, it was held at a small, cramped, very hot room where you could hardly breathe.

On Saturday, there was scant information that the venue had been changed to a much bigger and cooler room, so some reporters, including myself and Johny Edward, sprinted around the stadium trying to get into the old venue.

When we eventually found the right room, not much had changed apart from the size of the room and the working aircondition. It was still chaotic, the microphones and loid speakers did not work so reporters had to crowd around the coaches and players to hear clearly what they were saying.

When you contrast what passes up as press conferences in Uyo with what obtains anywhere else, for instance Yaounde, you would feel shame for Nigeria. They had free, working wifi too at the Stade Omnisports in Yaounde. And your own internet worked perfectly if you wanted to use it. No jamming of signals.

ZAMBIA NOT JUST ALL TALK 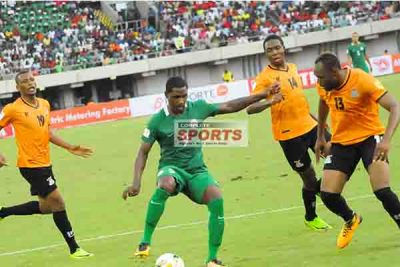 Chipolopolo talked tough before the game and every Nigerian wanted them to get a proper pasting to put them in their place.

But the young Zambians were not intimidated by Nigeria’s big names and they came with a game plan to frustrate the Super Eagles, which nearly worked to perfection.

The Zambians were very organised and compact, they identified Nigeria’s strengths and worked hard to nullify these strengths.

Mikel Obi was given no time on the ball, Moses was double-teamed or triple-teamed anytime he had the ball and wanted to dribble, Odion Ighalo was paid close attention and he had little impact. Nigeria also played into Zambia’s hands by isolating Ighalo, with nobody picking up the second balls when he beat the defenders in the air.

Zambia absolutely stretched the Super Eagles, finding cracks in the ‘Oyinbo Wall’ of Leon Balogun and William Troost-Ekong with trickery and pace, and stifling Nigeria in midfield.

It took Nigeria’s superior technical ability and experience to see off the brave Zambians, who admitted afterwards that it was their best game of the qualifiers, even better than their away win over Algeria.

The Zambians, led by their outspoken coach Wedson Nyirenda, talked a good game. They played a good game, too.

CROWD CONTROL CAN BE BETTER HANDLED 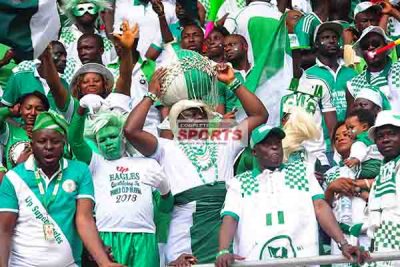 It is disheartening to learn that people got injured while trying to gain entry into the stadium to cheer their country to victory.

The incident at the Godswill Akpabio Stadium was apparently caused by a surge in the number of spectators trying to get into the ground after the gates were thrown open.

If it is indeed true that the Akwa Ibom State government ordered that the gates should be thrown open for everyone, even those without tickets, just as the match was about to start, then the government should please stop this practice.

The state has already done enough for their people by subsidizing the price of tickets which meant fans paid just N500 and N1,000. Allowing free entry is inviting avoidable disaster.

Also, the tickets and seats should be numbered in subsequent matches to avoid chaos in the stands. And the security personnel at the gates must be properly trained on how to handle an unruly crowd without causing serious injuries or even death. 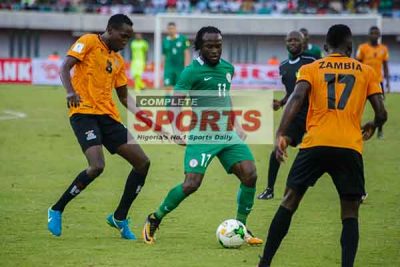 The Super Eagles are the most unpredictable team in the world. They make light work of opponents expected to give them a tough time and struggle against ‘easy opposition.

The presence of Cameroon and Algeria in Nigeria’s World Cup qualifying group was why it was called the ‘group of death’ but the Super Eagles eased past three two teams in Uyo.

Zambia, supposedly the weakest team in the group, provided Nigeria’s sternest test in Uyo, threatening to spoil the World Cup party, for which champagne had been ordered.

As they huffed and puffed against the Zambians, one started wondering why the Eagles were making heavy work of what was supposedly a straightforward task.

The conclusion? The Super Eagles do not like it the easy way. Easy is too mainstream for Mikel Obi and his men.

In the end, the only thing that mattered was that they booked their place at the 2018 World Cup with a quite impressive points haul of 13 from five games. Ironically, this is probably Nigeria’s most comfortable World Cup qualifying campaign in recent times.