By Nnamdi Ezekute in Kaliningrad:
Nigerian Football Supporters Club has rallied massive support for the Super Eagles at the 2018 FIFA World Cup in Russia, and a batch of the body that travelled to Russia on Tuesday demonstrated a result-oriented spirit all the way, Completesportsnigeria.com reports.
The supporters were on the same  flight with this reporter from Lagos through Doha, Qatar to Moscow. They boarded a train in Moscow to arrive in Kaliningrad much later on Tuesday.
The supporters were admired on board the aircraft and inside the airports as their regalia and humour-laden banter kept making heads turn.
Some Brazil supporters couldn’t hold back their admiration of the colourful and entertaining Nigerians, so much so that they joined in their songs and dance session inside the transit lounge of the Hamad International Airport, Doha. 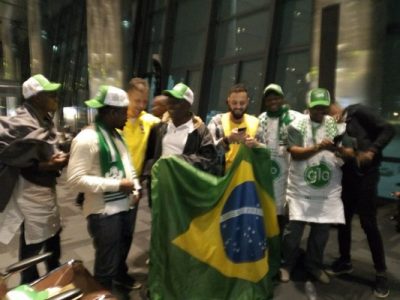 Assistant Social Secretary of the Supporters club, Olaniyan Oladapo, later told Completesportsnigeria.com on their arrival in Moscow, that the body led by President General Worldwide, Dr Rafiu Oladipo, was prepared to cheer the Super Eagles to winning ways at the World Cup in Russia.
“What you have seen is just a tip of the iceberg about what we are capable of doing to inspire the Super Eagles to winning ways in Russia,” Oladapo told Completesportsnigeria.com in Moscow.
“We have mobilized massive support for the Super Eagles. We want them to feel at home in Russia and play very well to win their matches. 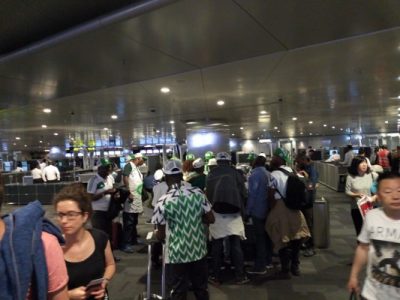 “From Nigeria alone, we are taking 2000 members to Russia. As you can see, we are going in batches and would have been complete in Russia on Saturday.
“We also have many members coming from other countries of the world to team up with us in Russia. Our members from Australia, United Kingdom, USA, Ghana, Cameron, Cote d’Ivoire, Germany, Spain, Tunisia, Burkina-Fask and South Africa are coming over.”
CSN also gathered that quite a number of Nigerian dignitaries will join the supporters club in Russia, including Oba of Aleke; Lagos State governor, Akinwumi Ambode; Governor Obaseki of Edo State, among others.
Copyright © 2020 Completesports.com All rights reserved. The information contained in Completesports.com may not be published, broadcast, rewritten, or redistributed without the prior written authority of Completesports.com. How I make $10,000 monthly in Online SALES? apply the *Social Media Marketing Strategy* and watch your account balance swell. Buy eBook NOW!!!