Taribo: Eagles’ Defenders Lack Tactics To Stop Messi, But Team Can Surprise The World In Russia Former Nigeria defender, Taribo West has posited that the Super Eagles do not have what it takes to stop Lionel Messi when they face Argentina in their third Group D match of 2018 FIFA World Cup in Saint Petersburg on June 26, but remains optimistic that the Gernot Rohr’s wards will impress as the dark horses of the tournament, Completesportsnigeria.com reports.

The former AC Milan strongman who spoke to Completesportsnigeria.com in Lagos on Saturday, said the Super Eagles’ defenders need special tactics to be able to stop the Argentine, but warned that there should not be much concentration on the Barcelona striker.

“We have good defenders, but from what I have seen, they don’t have what it takes to stop Messi at the World Cup. Stopping Messi requires special tactics which they don’t have,” the former Eagles defender told Conmpletesportsnigeria.com

“We don’t have the kind of defenders that can mark out Messi for 90 minutes and that will make it difficult for the Super Eagles. My advice is that they should not concentrate too much on him. During my playing days, you need just one player that will mark him out and throughout 90 minutes, there won’t be breathing space for him.” 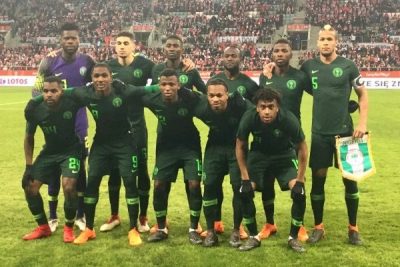 Speaking on the Gernot Rohr’s team generally, Taribo expresses confidence that with excellent preparations, they will excel in Russia.

“If you see the way they are preparing for the World Cup and the way they played during the qualifying series, I will say they did incredibly well and if they can continue like that, definitely they will excel in Russia,” the Super Eagles’ rugged defender at France’98 and Korea/Japan 2002 World Cups told CSN.

“I believe this team will do well because they are strong and young and that is some of the things you need in a team.

”A team like this present Super Eagles can create surprises and also go far in the World Cup.”

Nigeria will face Croatia, Iceland and Argentina in the Group D of the 2018 World Cup, and Taribo believes the Super Eagles will advance to the Second Round.

“I have no doubt that they will make it from the group as long as they play as a team and remain focused,” he said.