Super Eagles Jerseys Sold Out In London At N31,000 Each Hundreds of football fans were seen queuing up to purchase the new Super Eagles kit outside London’s NikeTown store in Oxford Street on Friday.

The shirt alone is priced by Nike at £64.95 (about N31,000) according to English tabloid, The Independent, and will likely be seen for the first time in action on Saturday evening when Nigeria face England at Wembley in the their pre-World Cup friendly game.

The kit which was reportedly sold out on Friday received more than three million pre-orders according to the Nigerian Football Federation before it finally went on sale Friday morning.

The kit, modelled by Arsenal’s Alex Iwobi, Leicester City’s duo of Alex Iwobi and Wilfred Ndidi is regarded as the best kit to be seen at the 2018 FIFA World Cup in Russia this summer.

According to English tabloid, The Independent, Nike extended the release date earlier this week due to high demand and the jerseys are now unavailable for purchase on the Nike website. 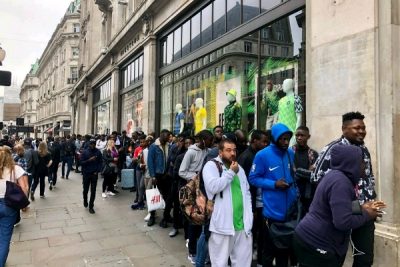 The kit was deliberately one of the last released for the World Cup, with the Nigeria Football Federation attempting to avoid the spread of fake replicas throughout the country.

After the game against England at the Wembley stadium, the Super Eagles will take on Czech Republic in another friendly in Vienna before battling Croatia in their opening Group D game on June 16.

They will also face Iceland in Volgograd on June 22 before traveling to Saint Petersburg to face Argentina in their final group game on June 26.