Real Madrid have won a record 13th UEFA Champions League title after beating Liverpool 3-1 in the final played in Kiev on Saturday.

It was a night to forget for Liverpool keeper Loris Karius as two errors from him gifted Karim Benzema and substitute Gareth Bale which led to Madrid’s first and third goals respectively.

They have now become the first club to win the Champions League three straight times since Bayern Munich last achieved the feat in 1974, 1975, 1976 (known then as European Cup).

Sergio Ramos is now the first player to captain his side to three Champions League final wins since Franz Beckenbauer with Bayern Munich in 1974, 1975, 1976.

It was a game that saw Liverpool parade the youngest starting eleven (26 years and 170 days) in a Champions League final since Borussia Dortmund in 2013 (25 years and 255 days), while Madrid lined up the same starting eleven that faced Juventus in last seasons’ final.

Madrid had the first big chance on 15 minutes through Ronaldo who raced down towards Liverpool goal only to see his shot go just over the bar.

Liverpool responded with their own attack on 23 minutes but Trent Alexander-Arnold’s low shot was well saved by Keylor Navas after Roberto Firmino’s initial effort was blocked.

Liverpool were dealt a huge blow as Mohamed Salah, their top scorer, went off with a shoulder injury on 30 minutes.

Madrid too suffered an injury setback as Dani Carvajal went off on 35 minutes and was replaced by Nacho.

Karim Benzema thought he had opened the scoring on 43 minutes but was flagged for offside after Ronaldo’s initial header was saved by Loris Karius. 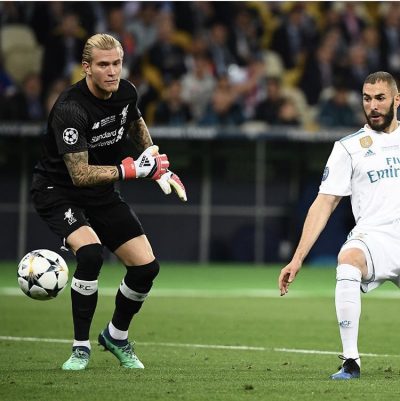 In first half added time, Benzema hit a low shot which went narrowly wide of the target.

Madrid should have opened scoring on 48 minutes only for Isco to see his stike come off the crossbar.

Benzema broke the deadlock on 51 minutes following a blunder by Liverpool keeper Karius who threw the ball against the French striker.

Liverpool were back on level terms on 55 minutes thanks to Mane who poked in Virgil van Dijk’s header from a corner. 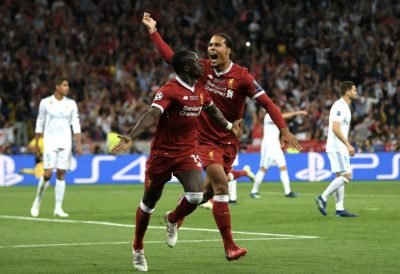 Isco had a big chance to put Madrid ahead on 61 minutes after turning inside the box from a right cross but Karius made a good reflex save.

Madrid took the lead again on 64 minutes off a spectacular overhead kick by substitute Bale.

Mane almost drew Liverpool back on level terms on 70 minutes but saw his low strike hit the post.

Karius pulled off a superb save on 81 minutes to deny Benzema from doubling Madrid’s lead.

In the 83rd minute, Madrid went 3-1 up following another mistake from Karius who fumbled Bale’s 25-yard strike.

Bale had a chance to go 4-1 up but he was denied by a brilliant block by a recovering Van Dijk as Jurgen Klopp lost his third straight final as Liverpool coach.