By Semiu Osho, who was LIVE at Wembley:

It was meant to be a friendly on Saturday, 2 June, another build-up game to the World Cup in Russia. But to Nigerians, it meant much more than a football match.

In November 1994, the first time both teams met at the old Wembley Stadium, Shuaibu Amodu had led a team of stellar names that had reached Africa’s peak of fifth in the FIFA ranking to play in front of 37,196 spectators. This time around, it was Gernot Rohr’s crop of mainly unheralded players. Yet the support for them was tremendous.

Right from my train station at the Green Park to Wembley, you could feel a carnival was in the air. On my journey via the Jubilee Line, I had a chat with two Nigerians, a conversation I initiated as we just like minding our own business on London transport. Just your phone is enough companion. 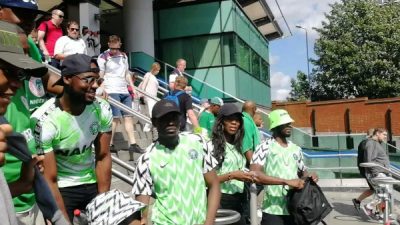 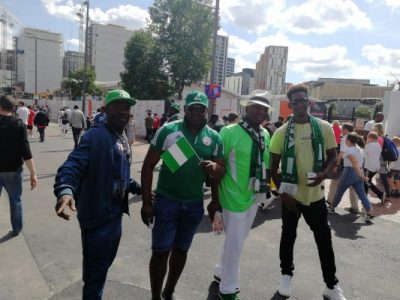 “So how do you think the match will pan out?” I queried in Yoruba (I heard them speak the language). The first one felt we could lose, the other went for a draw. They had purchased their tickets for £70 each. Indeed one of them has a match ticket for Nigeria’s upcoming Group D game against Argentina at the Russia 2018 World Cup. “I’m considering a day trip,” he told me. Not entirely impossible as it is just three hours 15 minutes flight time to Saint Petersburg, and the hosts are two hours ahead of England regarding time zones.

At the Wembley Park Station it was a party. My friend, Yommie Omogbeja, was waiting for me at the Stadium Library (I had his media pass with me) but I couldn’t resist taking in the beautiful display of patriotism and passion on display for Nigeria, especially by diasporan Nigerians who had travelled from all over the United Kingdom and beyond to support the Super Eagles.

Twenty-four hours earlier, sports kits manufacturers Nike had announced the Super Eagles World Cup kit had lasted less than 30 minutes after its release that day. I was not surprised. I had a work colleague who was on his phone all night monitoring its release in order to get one. And the evidence was on display right from when I came out of the Wembley Park Station.

They had the shirts on, men and women, and their kids too. Those who were unlucky not to get the new kits managed to find other green outfits just to show solidarity. Meanwhile, I saw a group of Nigerians who were especially excited. Among them was Sola Ogunlade, who introduced himself as acting chairman, Supporters Club, London chapter. In his company was another supporter wearing a 3SC hat. 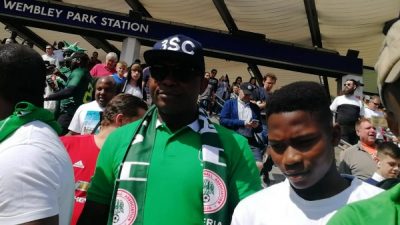 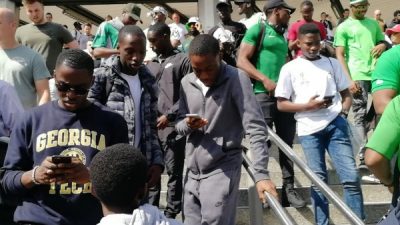 Meanwhile, local Brits also joined in the frenzy, after all it is England against Nigeria. Local bands were playing lovely tunes just outside the stadium while some others decided to make scarves with joint colours and names of the two countries on show. It wasn’t a bad souvenir, to be honest.

Inside the stadium, it was obviously a world of difference in comparison with FC Barnet Stadium where the Super Eagles had played Serbia. Well…5,318 capacity v 90,000 is a mismatch. Nigerians, including celebrities like singer Banky Wellington, actor John Boyega and singer KCee, were at the stadium to cheer the Super Eagles. Some of these celebrities actually had another show, One Africa Music Fest, at nearby Wembley Arena, to attend just later in the evening. Well, I turned down a ticket for the show as I had to concentrate on the football side, and post-match work. Sorry. 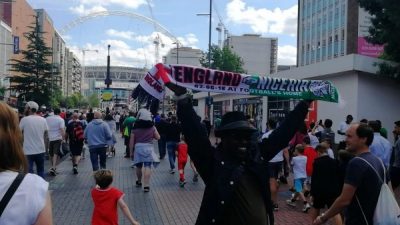 The Eagles lost the game, but Nigerians didn’t miss the thrills of the day. Although I spent about 30minutes waiting to enter the train station (human traffic), even after over one hour since the game was finished, it was certainly a day to remember for me. And for many Nigerians.