Referee Joseph Lamptey of Ghana has been in the eye of the storm for his handling of the South Africa versus Senegal World Cup qualifying game last November which the Bafana Bafana won after a controversial penalty by the centre-referee.

The ball hit Senegal defender Kalidou Koulibaly on the leg, but, despite no appeals, Lamptey pointed to the spot, to the incredulity of the Senegal team.

Senegal lodged an official complaint to CAF and Fifa and the immigration officer, who was named Ghana’s best referee some time ago, was handed an initial three-month ban by CAF – but FIFA has banned him for life.

Lamptey has been banned for life by FIFA and the game ordered to be replayed but revelations have emerged by Ghanaian football website www.sportsobama.com that Referee Lamptey has a long list of controversial calls made in the course of his career.

Here is a list of the most controversial of his calls… 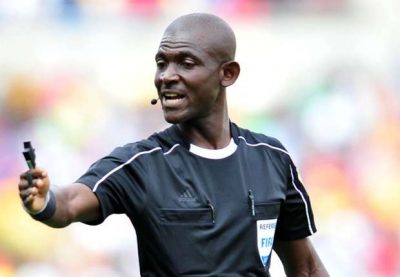 Referee Joseph Odartey Lamptey was in charge of a crucial decider in May 2014. A promotional play-off between Accra Great Olympics and Tema Youth. The two sides were tied on points going into the game and required wins to seal promotion into the topflight.

Tema Youth made an 11th minute penalty request when striker Ekow Benson was clearly brought down in the Olympic penalty box turned down by FIFA Referee Joseph Lamptey.

Six minutes into the second half, Joseph Armah scored what could pass for his most precious goal for Olympics to take a 2-1 lead. Tema Youth continued to pile incessant pressure but some questionable refereeing decisions by Lamptey nearly ended the drama-filled match abruptly, after Tema Youth CEO, Wilfred Osei Palmer, ordered his boys to abandon the match in the 84th minute in protest against what they perceived as biased officiating. Indeed, Palmer carried through his threat as his charges walked off the pitch, but that action was brief as their player Issah Huzeifa and King Faisal boss, Alhaji Abdul Karim Gruzah, cooled down tempers and convinced them to continue with play. Olympics defended with zeal as Tema Youth mounted a series of attacks but on each occasion they were frustrated by the referee Lamptey who was roundly booed and insulted by the neutral Kumasi stadium fans. 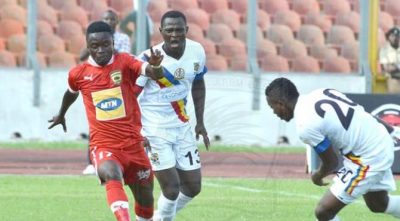 On May 11 2010, Cape Coast Ebusua Dwarfs clashed with Tarkwa Medeama in the Ghana Division One final play-off at the Ohene Djan Stadium in Accra. The result could guarantee the Zone II leaders book their place when the 2010/2011 Glo Premier League kicks off.

Level on six points apiece, the tension had been stoked prior to kickoff at the Ohene Djan Stadium as a win either way could ensure.

On the stroke of half-time, referee Joseph Lamptey awarded what could perhaps be described as the most astonishing penalty in the history of Ghana football.

Ebusua Dwarfs’ experienced striker Emmanuel Osei Kuffuor clashed with a Medeama SC defender and referee Lamptey didn’t hesitate to award a penalty in favour of the Cape Coast side, brushing off a heated protest from the Medeama SC players.

Replays clearly showed the incident was meters away from the goal area with referee Lamptey so close to have missed it.

The resultant spot kick was tucked in by Francis Gyepi to set the scene for a promotion party as it restored Dwarfs to the elite ranks once again. 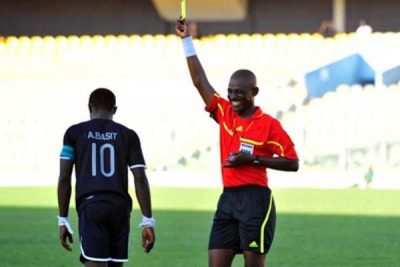 Ghana’s Asante Kotoko and Medeama SC clashed in the final of the 2015 MTN FA Cup at the Sekondi-Takoradi stadium.

The Porcupine Warriors were beaten 2-1 at the Sekondi Stadium but the talking point of the game was about Richard Mpong’s disallowed equalizer for Kotoko.

The substitute headed in a spilled ball from Medeama goalkeeper Muntari Tagoe but referee Lamptey whistled for an infringement inside the box-which was unclear even to the Medeama SC players.

This was shortly after Medeama had shot ahead through substitute Bismark Oppong.

Then Asante Kotoko coach David Duncan hit out at Joseph Lamptey, describing his performance as appalling and called on the Ghana FA to sanction him accordingly.

CAF appointed referee Lamptey for a decider between Egyptian side Zamalek and TP Mazembe in the 2014 CAF Champions League group game.

Zamalek coach Ahmed Mido following a 1-0 defeat to Mazembe, accused the Ghanaian referee of taking a bribe to cheat them.

Lamptey came in for serious bashing from the Egyptian fans and media over claims he robbed the White Knights into their 1-0 defeat to the Congolese giants.

A 13th minute strike from Rainford Kalaba proved enough to hand Mazembe the vital win before their home fans to put them in full control of Group A with three matches left.

Players of Zamalek charged on the experienced Ghanaian referee after he blasted his whistle to end the match to register their protest of his performance on the day.

Coach Mido has now called on CAF to look into Lamptey’s performance over claims he took a bribe from the hosts to officiate in their favour. 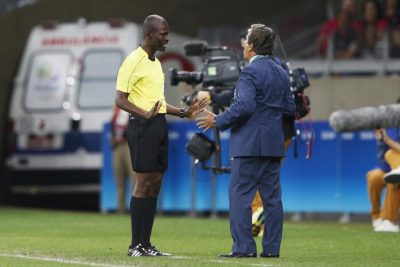 Referee Lamptey was in charge of one of Ghana football’s most famous matches. A GHALCA Top 4 clash between Heart of Lions and Asante Kotoko.

Kotoko’s opponents opened the scores in the 46th minutes when Sadat Bukari applied his head to a lob from the right flanks but the goal was cancelled by Osei Kwame in the 73rd minute from what connoisseurs believe looked like an off-side.

But it became obvious from the 60th minute mark that referee Lamptey had lost control of the beautiful game as he ignored some crunchy tackles from both sides.

What perhaps sparked off the riots was an incident, which occurred, in the 64th minute. The referee ignored an obvious penalty to Lions and in order to perhaps compensate them, awarded a dubious 86th-minute spot kick, which was met with a spontaneous reaction from the Kotoko fans. Not even a security beefed-up by the Military police could stop the fans from ripping off the seats while both Kotoko players and officials left for the dressing room. Most supporters considered as scandalous officiating in an ill-tempered GHALCA Top Four match in Accra on 23 January 2005. Kotoko walked off the pitch and fans pelted the match officials with missiles.

Referee Lamptey was subsequently prevented from entering the changing room situated beneath the May 9 Stands during recess. Sequel to this, security personnel had to move him to the old dressing room located underneath the VIP Stands to avoid further confrontations.

Kotoko’s then Accra representative, Jerry Asare “Show Show” became famous for walking Kotoko’s players and officials off the game which was abandoned. The match is very popularly referred by Ghanaian soccer fans as “Yenbo biom”, which literally translates, “We won’t play again”.

In March 2016, Joseph Lamptey was again appointed by CAF to handle the 2017 Africa Cup of Nations (AFCON) qualifier between Congo DR and Angola. At 90 minutes, the game stood at DR Congo 2 -0 Angola. Lamptey signalled for 5 minutes of added time at the end.

The 5 minutes of added time were pretty uneventful, and the players were really play acting to waste time. At 95 minutes the referee didn’t call time. At roughly 95:30 a player went down and was stretchered off; this process took about a minute. The ref quickly signaled for physio staff to take him off and that was that.

Lamptey kept play going until 99 minutes and at 99:15 Angola attempted an ambitious cross to the edge of the 18 yard area that an Angolan and DRC player went up for, the Angola player in front. He got the ball and headed it out for a goal kick, but the referee pointed to the spot! The replay showed that there was little contact, perhaps a slight bump as they both jumped but the hands were low and there didn’t seem to be anything in the call at all.

The announcers even chuckled a bit at the call, suggesting that it was a weak call and perhaps there may have been some shirt tugging or it could be a makeup call from the first half, but reports say everyone at the Matyres stadium was pretty baffled that the Ghanaian official could make that call, that late in the match. At 99:30 Angola converted their penalty and the referee almost immediately blew his whistle, signaling full time at almost double the added time.

This match, according to many reports in Kinshasa, could have been fixed by betting syndicates. 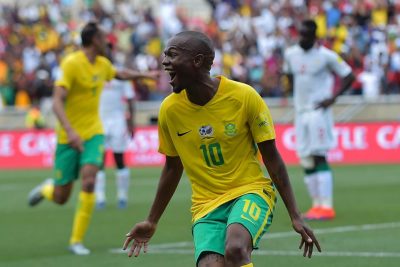 The Ghana referee was put as the mediator of a 2010 ‘dog fight’ between two north African rivals – Tunisia’s Esperance and Al Ahli of Egypt with the prize at stake being a place in the final of this year’s Caf Champions League.

Lamptey wasted no time at all in stealing the limelight from the main performers of the night (the players) by awarding a highly disputed goal in the November 7 Stadium in Tunis.

Esperance’s striker Michael Eneramo scored a controversial goal with his hand just under one minute to deny the Egyptian giants an opportunity to win the title for the seventh time.

The Red Devils claimed on their website that the referee was ‘clearly biased.’

Television replays show the Nigerian international clearly using his arm to steer the ball into the net after a headed cross. Al Ahly coach Hossam al-Badri said the referee could be blamed for causing them to miss the US$1.5m first prize and a place in the end-of-year Fifa Club World Cup.

“The match was over before the kickoff,” Al-Badri as quoted as saying by BBC. “I feel sorry because we play football in Africa where referees do whatever they want.”

Lamptey was subsequently slapped with a six- month ban for allowing such a ‘dubious’ goal. However, he returned to take charge of more matches. 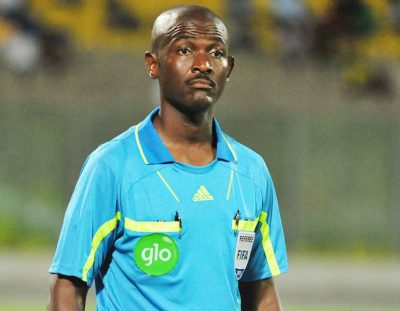 This is perhaps the last straw to have broken the strong camels’ back. Lamptey was put in charge of the FIFA World Cup qualifier between South Africa vs Senegal last year.

CAF handed him a three-month ban but has proceeded to ban the Ghanaian topman for life citing “manipulation”.

The Senegal Football Federation (FSF), who made a complaint to Fifa over Lamptey, is happy with the decision.

FSF vice-president Abdoulaye Sow said “cheating and stealing must be struck out of the game”.

It remains unclear whether Joseph Lamptey will use his option of an appeal to fight the ruling.