By Nurudeen Obalola:
Nigerian players Adeleke Akinyemi and Tosin Aiyegun were the stars of the show on Thursday night as they scored all the goals in their top flight Latvian club Ventspils’ 5-0 win over Albanian top league side Luftetari in the first leg of their UEFA Europa League first qualifying round tie, Completesportsnigeria.com reports.

Akinyemi, a 19-year-old striker who joined Ventspils in March 2017, scored four of the goals while Aiyegun, 20, added the other as their club took a huge step towards the second qualifying round.

Akinyemi opened the scoring for the Latvians after just eight minutes from the penalty spot and added the second four minutes later, assisted by Aiyegun. 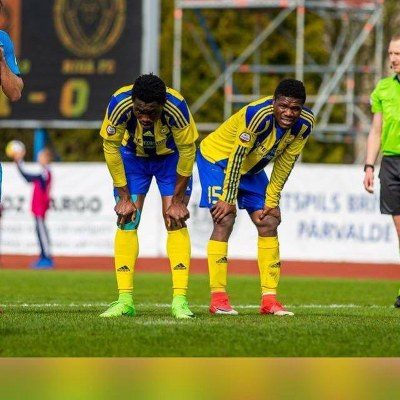 The prolific Akinyemi, who had scored eight goals in 14 games this season before Thursday night, completed his hat-trick in the 24th minute.

Aiyegun scored Ventspils’ fourth goal from the penalty spot in the 37th minute.
And two minutes before half-time, the Nigerian double act continued as Aiyegun again assisted Akinyemi who bagged his fourth and his side’s fifth.
There were no further goals in the second half.

The second leg of the tie comes up in Albania next Thursday night with the winners on agreggate advancing to the second qualifying round.