Nigeria will face perennial rivals Ghana in the final of the WAFU B 2019 U-17 Africa Cup of Nations qualifying tournament following a 2-1 win against hosts Niger in their semi-final clash at the Seyni Koutnche Stadium, Niamey on Wednesday, Completesportsnigeria.com reports.

The Golden Eaglets who dominated the game right from the start took the lead two minutes before the break through Akin Amoo who tapped in from close range after he was teed up by Mohammed Ibrahim.

Man-of-the match, Olakunle Olusegun doubled Nigeria’s lead two minutes before the half hour mark curling in a brilliant effort from the edge of the box.

The hosts pulled a goal back on the dot of 90 minutes but were unable to find the equaliser.

It was the second victory of the competition for Manu Garba’s charges who lost 3-2 to already eliminated Burkina Faso in their first game. 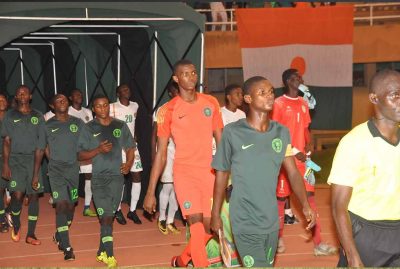 Earlier, 10-man Black Starlets of Ghana rallied from a goal down to beat Cote d’lvoire 2-1 and booked their spot in the final.

The final will be played on Saturday at the Seyni Koutnche Stadium, Niamey.

The winner of the competition will qualify for the 2019 CAF U-17 Africa Cup of Nations in Tanzania.