The Super Falconets revived their hopes of making it to the knockout stages at the FIFA U-20 Women’s World Cup with a hard-fought 1-0 win against Haiti in their Group D encounter on Thursday, at the Stade de Marville, Saint Malo, reports Completesportsnigeria.com.

Chris Danjuma’s ladies lost 1-0 to Germany in their first game in the competition on Monday.

Talented forward, Rasheedat Ajibade scored the winning goal from the spot in the 36th minute.

Haiti dominated the game and were frustrated by a number good goalkeeping by Chiamaka Nnadozie. 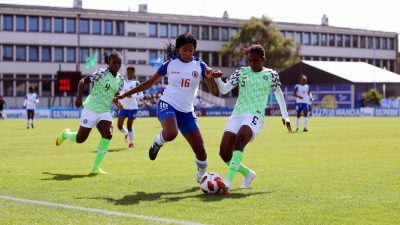 They moved from last to second position in the group and will need just a point from their last game against China on Monday to qualify for the quater-final.

Germany beat China 2-,0 in the other Group D game earlier on Thursday.