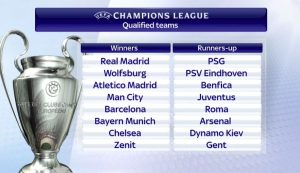 Arsenal against the odds booked their place into the round of 16 of the UEFA Champions League after beating Brown Ideye's Olympiacos 3-0.

Olivier Giroud put Arsenal, who had to win, ahead in the 29th minute after heading past the keeper off an Aaron Ramsey cross.

In the 49th minute, Giroud doubled Arsenal's lead after finishing off an assist from Joel Campbell.

The French striker grabbed his hat-trick in the 67th minute when he converted from the penalty spot following a hand ball by an Olympiakos player.

In Belgium, Super Eagles winger Moses Simon and Gent advanced to the knockout stage after they beat Zenit 2-1.

Goals from Laurent Depoitre and Danijel Milicevic secured the win for Gent. Artem Dzyuba got Zenit's only goal.

The impressive Simon set up the winner when he broke away down the left. His cross was not cleared, allowing Milicevic to pounce and score.
Simon was later substituted for Kenneth Saief in the 88th minute.