It is the second time Liverpool will beat Manchester City at Anfield this season after beating them 4-3 in the Premier League.

Manchester City failed to direct a single shot on target in a game for the first time since 26th October 2016 against Manchester United in the League Cup.

Leroy Sane had the game’s first chance on six minutes but his low strike from the left took a slight deflection before hitting the side netting.

But the it was Liverpool who took the lead through Salah on 12 minutes who slammed the into the roof of the net from a breakaway after Roberto Firmino’s initial effort was saved by Ederson. It was Salah’s 38th goal in all competitions this season.

Few minutes later, Manchester City should have equalised following a counterattack only for Sane to drag his shot wide.

In the 21st minute Liverpool doubled their lead off a brilliant sh9t outside the box from Chamberlain.

Liverpool continued to pile the pressure and were rewarded as Mane made it 3-0 on 31 minutes as he headed in Salah’s pinpoint cross.

One minute of into first half added time Nicolas Otamendi hit a low shot which went just wide.

Liverpool were forced into a substitution on 52 minutes as Salah went off with a knock and was replaced by Georgino Wijnaldum.

Mane should have extended Liverpool’s lead on 71 minutes but did not connect properly with Dominic Solanke’s cross.

City thought they had scored on 84th minute but Gabriel Jesus’ effort was ruled 0ut for offside.

At the Camp Nou, Barcelona secured a 4-1 win against AS Roma also on Wednesday night. 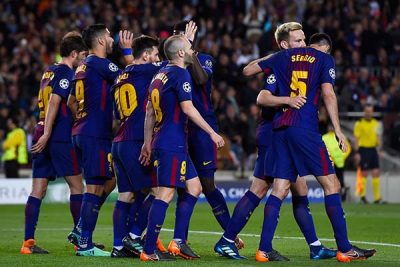 With 10 minutes left, Edin Dzeko pulled a goal back for Roma to give them a glimmer of hope going into the second-leg.

The return legs for both games will come up on Tuesday.