Holders Real Madrid will face Bayern Munich in the semi-finals of this season’s UEFA Champions League.

The other semi-final tie will see Liverpool do battle with surprise team AS Roma who stunned Barcelona in the quarter-final.

The draw was confirmed in Nyon, Switzerland on Friday.

Five-time winners of the Champions League Bayern will welcome Madrid to the Alianz Arena for the first leg before travelling to Spain for the return leg at the Santiago Bernabeu a week later.

Liverpool, who have also won Europe’s elite club competition five times, will be at home to Roma at Anfield for the first leg. 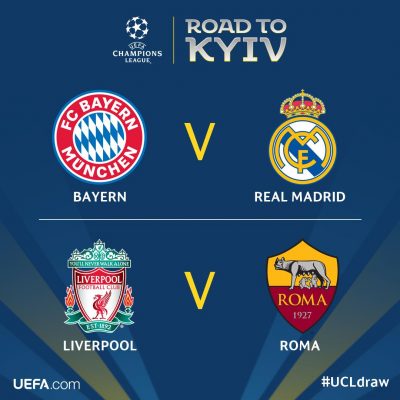 At last season’s quarter-final tie, Madrid eliminated Bayern 6-3 on aggregate to progress into the last four.