Moses made his fifth appearance for Chelsea who defeated Atletico Madrid 2-1 in a Group C UCL clash at the Wanda Metropolitano Stadium.

Michy Batshuayi came off the substitutes bench to seal the win for Antonio Conte’s side in the 90th minute of the encounter.

Alvaro Morata scored an equaliser on the hour mark after Antoine Griezmann had converted a penalty kick in the 40th minute of the thrilling encounter for Atletico Madrid. 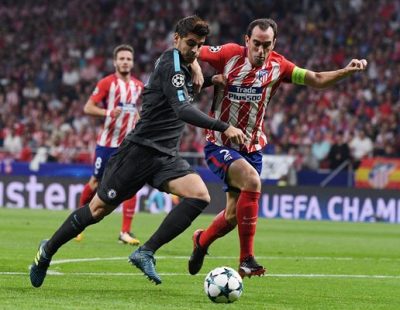 In the other Group C fixture, AS Roma recorded their first win of the UCL campaign with a 2-1 win over Qarabag.

Konstantinos Manolas and Edin Dzeko were on target for AS Roma while Pedro Henrique got a consolation for the hosts Qarabag.
Chelsea lead Group C with six point, two ahead of AS Roma whom the Blues play in back to back fixtures next month.

Atletico Madrid are third with a point while Qarabag occupy the fourth position.

In Group A, Romelu Lukaku scored a brace for Manchester United who annihilated CSKA Moscow 4-1 in their second group game in Russia. Lukaku has now scored 10 goals in nine United games in all competitions this season.

Further goals from Anthony Martial and Henrik Mkhitaryan sealed an emphatic win for Jose Mourinho’s side.

Konstantin Kuchaev grabbed a consolation strike in the 90th minute of the encounter.

In Switzerland, FC Basel beat Benfica 5-0 to bounce back from their opening day defeat away to Manchester United.

Dimitri Oberlin, Ricky van Wolfswinkel, Michael Lang and Blas Riveros scored in the rout for the Swiss side.

Manchester United top the group with six points from two games while Basel and CSKA Moscow are in second and third positions on the log. 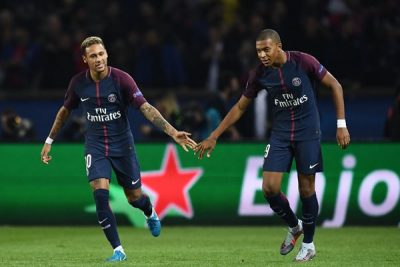 In the other Group B fixture, Celtic bounced back from their match day 1 trouncing in the hands of Paris Saint-Germain to beat Anderlecht 2-0 with Nigerian striker Henry Onyekuru playing for the entire duration of the encounter.

And own goal from Kara Mbodji, and strikes from Leigh Griffiths and Scott Sinclair sealed the win for Brendan Rodgers’ side at the Constant Vanden Stock.
The win moved Celtic to third in the group with an inferior goal difference behind Bayern Munich.

In Group D, Barcelona needed an own goal from Sebastian Coates in the 49th minute to record their second win of the competition away to Sporting CP.

Juventus also defeated Emmanuel Emenike’s Olympiacos 2-0 to return to winning ways after their opening day defeat away to Camp Nou.

Second half goals from Gonzalo Higuain and Mario Mandzukic sealed a first win for Juventus. 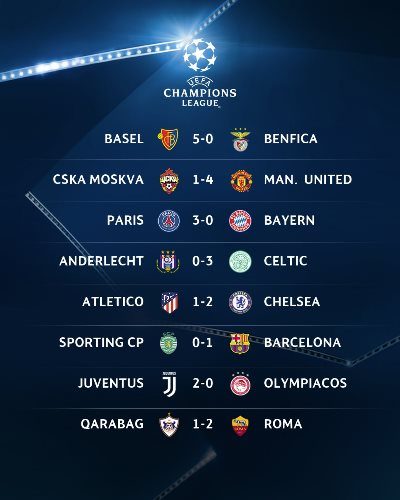