UCL Qualifying: Agbo In Action As Standard Liege Lose At Ajax, Crash Out By Adeboye Amosu:
Nigerian midfielder, Uche Agbo, was on for 90 minutes as his Belgian club, Standard Liege crashed out of the UEFA Champions League following a 3-0 loss to Dutch club, Ajax in the second of their third qualifying round fixture at the Johan Cruijff Arena, Amsterdam on Tuesday, reports Completesportsnigeria.com.

Standard Liege lost out 5-2 on aggregate, after they were held to a 2-2 draw at home in the first leg last week. 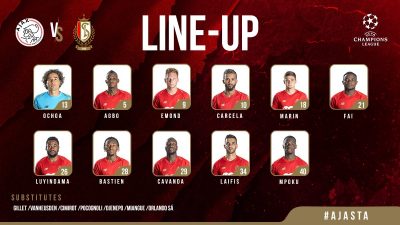 Klass Huntelaar, Matthjis de Light and David Neres were all on target for Ajax in the game.

At the Otkrytiye Arena, Moscow, Nigerian-born forward, Chuba Akpom was not dressed in Greek club, PAOK FC 0-0 draw against Spartak Moscow of Russia.

PAOK qualified 3-2 on aggregate to book their place in the next round.

Akpom who recently linked up with the club from English Premier League side, Arsenal was an unused substitute in the first leg.