David Silva scored a late winner for Manchester City who came from a goal down to beat Hoffenheim 2-1 in Tuesday’s UEFA Champions League Group F clash played at the Rhein-Neckar-Arena in Sinsheim, Germany.

Ishak Belfodil scored within 44 seconds to gave Hoffenheim the lead, but Sergio Aguero brought City straight back into it only six minutes later.

Hoffenheim’s opener became the earliest goal conceded by an English team in the Champions League since Stephan El Shaarawy scored after 39 seconds against Chelsea in October 2017.

Belfodil gave Hoffenheim the lead after he latched onto a through ball from Kerem Demirbay before firing a low drive past Ederson into the bottom-right corner.

Aguero poked in a cut back pass from Leroy Sane to restore parity for Manchester City.

In the second half, both teams came close to grabbing the winner but failed to take their chances in front of goal. With four minutes left to play, David Silva nipped in to steal a loose ball from Stefan Posch before firing a low shot past Oliver Baumann for the winner.

City who lost 2-1 in their Champions League opener to Lyon at the Etihad Stadium on matchday one ended their four-game winless streak in consecutive matches in the Champions League losing four of those games.

At the Juventus Stadium in Turin, Italy, a hat-trick from Paulo Dybala secured a second 3-0 win over ten-man Young Boys in a Group H clash. It’s the ninth straight win by Juve. 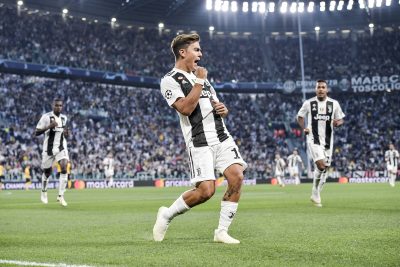 The Argentine striker opened the scoring for the Old Lady in the fifth minute volleying in Leonardo Bonucci’s lofty pass.

Dybala scored his second on the night firing in a rebound strike in the 33rd minute.

The 24-year-old completed his hat-trick with a tap-in in the 69th minute of the one-sided encounter.

Mohamed Aly Camara was sent off after he received a second yellow card in the 78th minute.

Juventus with Cristiano Ronaldo back in the squad will travel to Old Trafford to face Manchester United having racked up nine consecutive victories in all competitions.