The former UFC champion, 29, was one of several men alleged to have vandalised a bus containing rival fighters, the UFC said.

McGregor turned himself into police custody at 9pm local time on Thursday, the BBC reported.

NYPD have told BBC Sport that McGregor will see a judge after 7am (12pm Nigerian time).

“McGregor has been charged with three counts of assault and one of criminal mischief,” said a spokesperson.

The incident occurred at Brooklyn’s Barclays Center, where the UFC had gathered to promote Saturday’s show, headlined by Khabib Nurmagomedov and Max Holloway.

McGregor, who has been stripped of his UFC lightweight title, was with fellow fighter Artem Lobov, who was due to fight featherweight Alex Caceres, according to reports.

The UFC claimed McGregor and Lobov – accompanied by more than a “dozen individuals” – attacked the bus. 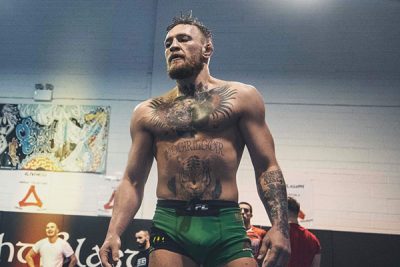 UFC says two fighters were injured and have been withdrawn from Saturday’s undercard.

Lobov has also been removed from the bill, due to his alleged involvement.

“The organisation deems today’s disruption completely unacceptable and is currently working on the consequences that will follow,” the UFC said.

McGregor was beaten by Floyd Mayweather in a boxing match in August 2017.