According to wwe.com, this year’s Wrestlemania 34 took place inside the Mercedes-Benz Superdome, New Orleans, Louisiana, USA.

Defending his WWE title, Styles overcame  Royal Rumble winner Shinsuke Nakamura in a match that failed to live up to expectations.

Styles looked to weaken Shinsuke’s left knee so he couldn’t hit his trademark Kinshasa finisher and tormented him with a Calf Killer submission.

When Nakamura did attempt the move, Styles caught his leg and expertly transitioned into his Styles Clash to get an unexpected victory.

In the post-match they hugged as Nakamura presented AJ with his title in a show of respect, only to drop to one knee and hit him with a low blow.

But Lesnar destroyed Reigns’ resistance with six F-5s – including one through an announce table – leaving him battered and broken.

The bloodied challenger tried to topple Brock by vaulting off the ropes with a spear – the same move he used to defeat The Undertaker last year.

However, it was not to be and fans who had jeered the polarising new face of the company roared as he finally succumbed to yet another F-5 from Lesnar.

Cena was forced to sit at ringside as a fan during the opening stages of Wrestlemania 34 as he had promised to do if he did not have a match on the card.

A referee called him to the back and he later emerged in his ring gear, before the lights went out in the packed Mercedes-Benz Superdome.

WWE teased fans by having the guitar-playing Elias – a recent rival of Cena – instead emerge and taunt his foe into giving him a swift beating.

But when a disappointed Cena trudged back up the ramp, the lights went out again and Taker’s trademark hat and cloak appeared in the ring.

The clothes, which he left in the middle of the ring following his apparent ‘retirement’ last year were struck by lightning and a bell rang out. 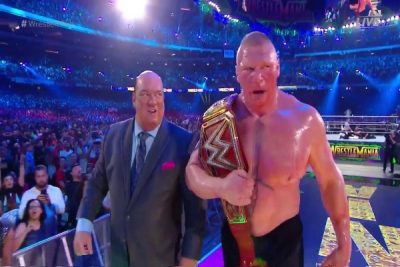 The stage was finally set for The Undertaker and the 16-time world champion, who has spent weeks insulting him.

The Undertaker ran through his signature moves including Old School as the unprepared Cena struggled.

And when he arrogantly mocked him, Undertaker sat up, caught Cena and defeated him with a huge chokeslam and Tombstone piledriver.

Another exciting match of the night was UFC icon Ronda Rousey teaming up with 1996 Atlanta Olympic Gold medal winner  Kurt Angle to defeat Tripple H and his wife Stephanie McMahon.

Stephanie and Triple H utilised every trick in the book to gain an unfair advantage, Stephanie repeatedly targeting Ronda with sneak attacks.

When Rousey was finally able to tag into the match, she fought at a breakneck pace, showing great potential as a top notch WWE superstar.

The final sequence saw Triple H and Stephanie try to hit synchronised Pedigrees, but Rousey made Stephanie tap out to her armbar to earn a win on her WWE debut.

In other bouts, became a Grand Slam Champion in WWE by capturing the Intercontinental Championship by seeing off Finn Balor and The Miz
in a cracking triple threat match.