Uruguay defeated hosts Russia 3-0 to seal top spot in Group A at the ongoing 2018 FIFA World Cup at the Samara Arena in Samara on Monday.

Luis Suarez’s brilliant free-kick and an own goal from Denis Cheryshev gave Uruguay a two-goal lead in the battle for top spot.

Edinson Cavani sealed the win for Uruguay, tapping in a rebound off s header from Diego Godin in the 90th minute of the game

Both teams made perfect starts to the World Cup, winning their opening games against Egypt and Saudi Arabia respectively. 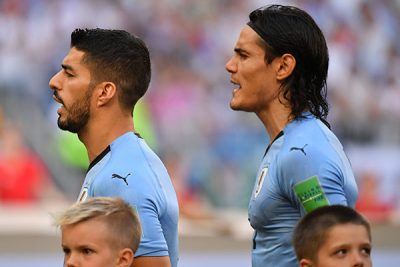 But Russia were stunned in the 10th minute after Suarez curled in a freekick from 20 yards.

In the 23rd minute, Cheryshev deflected in Diego Laxalt shot off a corner kick to hand the Uruguay a 2-0 lead.

Igor Smolnikov was sent off for two quick bookings, the second a bad tackle on Laxlat in the 36th minute. He became the first player to be sent off for the World Cup hosts since Itumeleng Khune’s red card for South Africa in 2010.

Russia had a couple of half-chances to equalise in the second half as Denis Cheryshev stung the hands of Fernando Muslera and Artem Dzyuba headed into the ground and over from a corner.

Cavani sealed the win with a tap in from close range for his first World Cup goal. 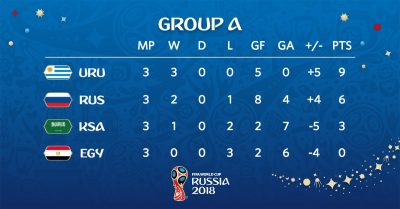 At ​Volgograd Arena, Saudi Arabia ended their poor record at the World Cup by recording a 2-1 win over Egypt.

Saudi Arabia had earlier gone 11 matches without recording a win at a World Cup.

Mohamed Salah gave Egypt the lead in the 22nd minute with a delightful lob over the goalkeeper. 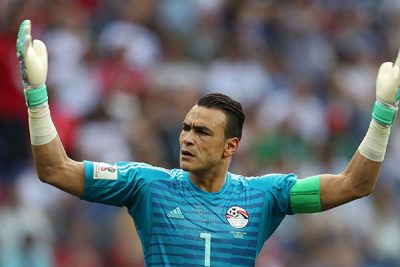 Salman-al-Faraj restored parity for Saudi Arabia dispatching a penalty in the stoppage time of the first half after Ahmed Hegazi was cautioned for tugging the shirt of Fahad Al-Muwallad.

Salem Al-Dawsari sealed the win for Saudi Arabia in added time of the second half.

Egypt, who fielded Essam El Hadary, the oldest ever player at a World Cup aged 45, are without a win in their last six appearances at the World Cup. They have only recorded two draws from their previous six contests.