By Johnny Edward:
Francis Uzoho’s RC Deportivo Fabril – the reserve team of Deportivo La Corina, missed a chance to gain promotion to the Spanish second division from the third tier Segunda B despite winning 3-2 in the second leg of their promotion play-offs clash against Extremadura on Saturday, reports Completesportsnigeria.com.

Uzoho missed the encounter due to international assignment with Nigeria’s Super Eagles. RC Deportivo Fabril and Extremadura ended it 4-4 on aggregate, but the latter advanced with higher away goals, having won the first leg 2-1.

Edu Expósito doubled the lead for RC Deportivo Fabril in the 21st minute before Emilio Lucas made it 3-1 in extra time. Álex Barrera scored a consolation for Extremadura in the 107th minute of the defeat.

Uzoho who is out of contract at Deportivo La Coruna kept 16 clean sheets and conceding 21 goals in 28 appearances. 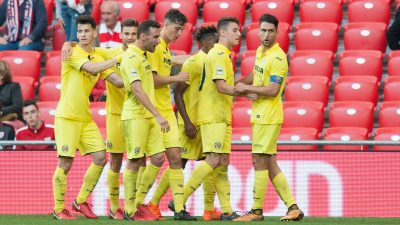 Meanwhile, Samuel Chukwueze’s Villarreal Team B advanced to the second round of the promotion pla-yoffs on a 3-3 aggregate despite losing 2-0 to Athletic Bilbao B in the second leg played on Saturday.

First half goals from Gorka Guruzeta and Manuel López were not enough to secure a next place in the next round for Athletic Bilbao B.