The coach of the Indomitable Lions Hugo Broos has taken a public swipe at his two best players Vincent Aboubakar and AFCON 2017 Most Valuable Player Christian Bassogog following the 1-1 draw against the Super Eagles of Nigeria in a World Cup qualifying game at the Stade Ahmadou Ahijo in Yaounde on Monday evening, Cameroon media has reported.

The outspoken Belgian tactician, not the most diplomatic man in the room, vented his frustrations at the Indomitable Lions’ elimination from the 2018 World Cup qualifying race on the under-performing players at a post-match conference.

Broos explained his decision to not start the duo of Aboubakar and Bassagog, putting the two on the bench before bringing them in in the 65th and 80th minutes respectively.

“I put Abuboukar on the bench to wake him up. I did this once at the AFCON and I just did again. I think his response (to being dropped) was very good. He was present in the game. He understood what I want from him. He is a very good striker, but sometimes he is confused. On the field, he loses a lot of balls and especially, when he has the ball, he always thinks that it is he who must make the difference. That’s why he loses a lot of balls,” Broos said.

Not a flattering testimonial but this was mild compared to Broos’ opinion of China-based Bassagog.

He said: “Christian (Bassagog) was not in charge because he has to change his way of playing. It’s very predictable. If I were 40 years younger, he would never go past me with the ball because everyone knows what he’s going to do. At the AFCON, he emerged MVP because several teams did not know Bassogog. But coaches now know what they need to do when playing against him.” 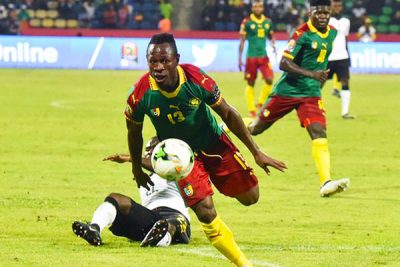 On how to stop the left-footed stocky attacker, Broos gave a heads up to other coaches.

“It’s very easy to mark Bassagog out. Just put a defender who’s as fast as him and he’s in trouble. So if Christian becomes aware that he will not always take the ball and run, he has to vary his game and he will become a better player,” said the Indomitable Lions coach.

Cameroon have three points from four games and have no hope of making it to the World Cup again even though there are two games left as group leaders Nigeria are already on 10.

Zambia are away in Algeria for the second leg of their own double-header after winning the first leg 3-1 in Ndola last Saturday. The Chipolopolo have four points while the Fenencs are on one point.