By Adeboye Amosu:
Watford manager, Javi Garcia, has praised Isaac Success after the Nigeria international scored in the club’s 2-0 away win against Reading in their Carabao Cup second round fixture at the Madjeski Stadium on Wednesday, reports Completesportsnigeria.com.

Success opened scoring in the 36th minute of the encounter with Domingos Quina getting the second for Garcia’s men in the second half.

It was the first time Success would start a game for the Hornets since 2016 and his first goal since he hit the back of the net in Watford’s 2-2 draw against Bournemouth in an English Premier League game on October 1, 2017.

The former Nigeria youth international’s all round performance against Reading proved he is now a genuine alternative off the bench. 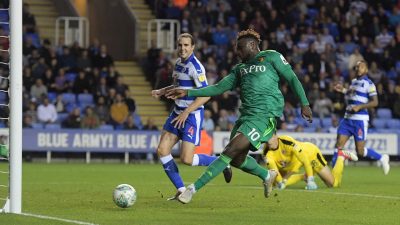 He will also look to challenge the duo of Troy Deeney and Andre Gray for starting berth in the team.

“Today he (Success) has scored a good goal for the team,” Gracia stated during his post match interaction with the media.

“I spoke with every player before the game and tried to explain that they don’t have to show anything different than they usually do in training, in pre-season.

“They are good professionals – the only thing that changed is the opportunity to play. It is very good for the group that they enjoy more minutes.”