This was the very first time Manchester United and Chelsea would meet in a Cup final.

After wrapping up the Premier League title, United also had their sights set on clinching the FA Cup to complete the double.

While for Chelsea, they were hoping to land their first FA Cup trophy after last winning it in 1970.

It turned out to be a day to forget for Chelsea as they were hammered 4-0 by a rampant United side.

Mark Hughes got on the score sheet on 68 minutes to give United a 3-0 lead before Brian Mclair completed the rout on 90 minutes.

Both Chelsea and United had to wait 13 years before crossing paths in another Cup final and once again it was in the FA Cup final of 2007.

But it was Chelsea, then under current United boss Jose Mourinho, who emerged winners thanks to Didier Drogba’s 116th minute goal which gave the Blues a hard-fought 1-0 win in one of the dullest FA Cup finals ever.

Also in action for the Blues was Super Eagles skipper Mikel Obi who played the whole game. 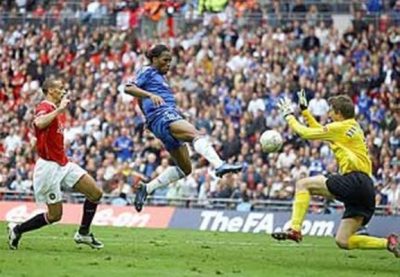 Chelsea qualified for their first ever UEFA Champions League final in the 2007/2008 season and faced Manchester United.

It was Chelsea’s last hope of landing silverware that season after losing 2-1 to Tottenham Hotspur in the League Cup final and finishing second to United in the Premier League.

For United, they were aiming to add the Champions League trophy to the league title which they retained. 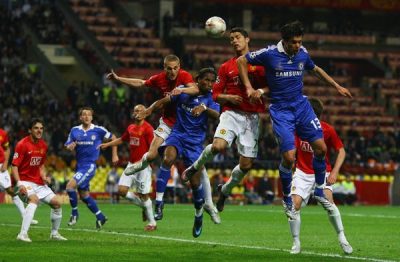 After a gruelling 120 minutes of football, United eventually won 6-5 on penalties after both sides were tied at 1-1.

Cristiano Ronaldo put United ahead in the 26th minute but Chelsea were back on level terms through Frank Lampard on the stroke of half-time.

Dutch keeper Edwin van der Sar was the hero for United as he stopped Nicolas Anelka’s kick during sudden death to land the Red Devils their third Champions League trophy.