Arsenal boss Arsene Wenger has blamed poor officiating for his side’s 3-1 away defeat to Leicester City in the Premier League on Wednesday night.

Pierre-Emerick Aubameyang drew Arsenal level, finishing off from a rebound after his initial effort was saved by Leicester keeper Eldin Jakupovic. 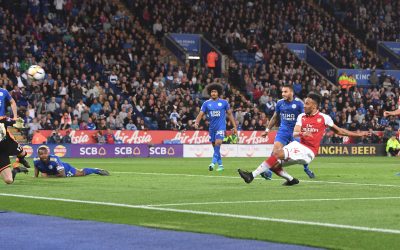 Arsenal January signing Kostantinos Mavropanos was sent off for pulling down Iheanacho who was clean through on goal following a mistake by the Greek defender.

Reacting to the outcome of the game, Wenger praised his side for their effort despite playing most part of the game with 10 men.

“Overall I believe we played a great game today. Even with 10 against 11 we should win the game. I’m convinced what changed the game was the penalty. I have complaints about the red card as well but I think we dealt well with the situation. I would like to praise the team for the spirit they showed tonight.”

“There is always a reason for the defeat, but if you isolate each game, it is unfortunate what happened tonight. I think the Premier League has voted against VAR and it is upsetting. It destroys me because we were in front of the rest of the world, and now we want to be behind.”

Asked whether it has sunk in that he will be leaving this summer, Wenger replied: “Yes, slowly, the last three or four weeks have been step-by-step so you have time to adjust. I realise it now. It was very nice to hear applause from both sets of fans and I’m very grateful for that.”