We talk about the best and the most efficient teams that will take part in 2018 FIFA World Cup in Russia.

“A game without a goal is like love without a kiss”, said Jose Altafini, a prominent Brazilian-Italian footballer once said. He was a part of the “The Squad” or “Seleção” (Brazil’s national soccer team) that brought Brazil’s soccer team to World Championship. In a way, he’s absolutely right – goals in football are as natural as people in love kissing. If so happens that a game went without a goal, then many average people that know nothing about intricacies of planning and strategy in football leave disappointed, thinking they’ve wasted 2 hours of their time.

Thankfully, modern football is lucky to have many teams that are willing and able to give the spectators the feast of goals on the field. This article is going to talk about the teams that scored the most before the final parts of the World Cup 2018.

We have to clarify that we were taking into consideration only final rounds of the qualification phases on the continents and (where necessary) – playoff matches. Here’s the list based on 777score.ng statistics. Enjoy!

Top assists of the qualification: No leader, 9 players have 1 assist each. 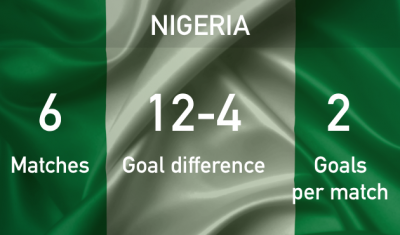 The Super Eagles have competently qualified in their federation. The final round of the Group B saw Nigeria fighting to get their chance to World Cup against Cameroon, Algeria and Zambia and left them no hope by earning 14 points, outscoring Zambia in second place by six. The only team that was able to deliver more goals was DR Congo’s national team but they, contrary to the Super Eagles were not able to qualify for 2018 World Cup.

We can safely say that the most spectacular game in all of this was Nigeria’s home game against Cameroon. Nigerians have completely destroyed their veteran opponent 4:0 in September of 2017 – 4:0. What’s more interesting is that all four goals, as well as four assists, were earned by different members of the team, which shows how versatile the team is.

The best Nigerian goalscorer was Chelsea’s defender Victor Moses. He has 3 goals in 4 matches to his name. As well as being the top scorer, 27-year old soccer can boast his tackle skills (48% successful), as well as dribbling and duel skills (7 actions per match/average, 65% success rate).

Top assists of the qualification: Seferović, Xhemaili, Shaqiri – 3 each, Behrami – 2. 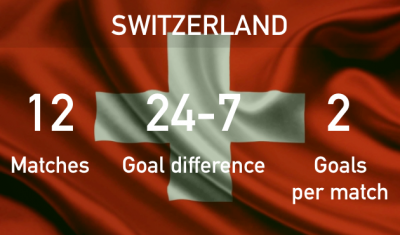 The Swiss have gone through a difficult path to the World Cup. They had a chance to play in the same group as Portugal, current European champions. Portuguese got ahead because of the better performance and despite having equal points. As a result, Petković’s team had to play in the playoff matches against Northern Ireland, where they were stronger only thanks to one goal scored by them in two games.

In the qualifying tournament, the Swiss showed excellent performance – 23 goals in 10 matches. The composition of the group obviously contributed to this, since they were against the teams of Andorra, Latvia and the Faroe Islands. However, the fact that the Swiss were able to score the most against Hungarians, a pretty strong team overall most of all, scoring 3: 2 in the away match and then decimating them at home 5:2.

Now the Swiss are going to be in the Group E, facing off against teams like Brazil, Serbia and Costa Rica. They all know how to score, so matches in this group will not be boring. 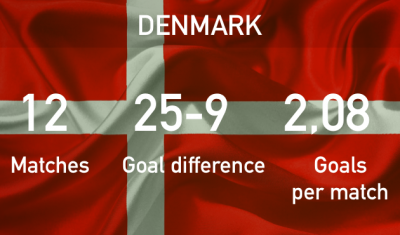 Denmark had serious and well-prepared opponents in the qualification but because of the instability (especially in the beginning), they lost the first place in the group and direct qualification to the Poles. As a result, they had to fight for the right to qualify for the 2018 FIFA World Cup with the Irish and after a very boring tie (0:0), the Scands left the opposition no chance by almost literally blowing them out of the stadium – 5:1.

However, they fought well with the Polish team just the same during the qualifying rounds during their home match, despite the Polish team winning overall. Danes scored 4:0 against the leader of the group, scoring twice in every period.

The main goalscorer of The Red-Whites is Tottenham’s midfielder, Christian Eriksen. He has 11 goals and 3 assists to his name – the undeniable best of the Danish team. He also has a high rate of woodwork shots – on average, from his 3.4 shots at the opponents’ goal, 57% of shots got the frame.

Top assists of the qualification: Augustinsson – 4, Toivonen – 3, Lustig, Kraft – 2 each. 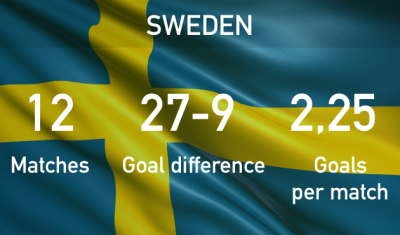 The Swedes also had to fight their way to the 2018 World Cup finals. They’ve had the misfortune to be qualifying in the group of death, along with French and the Dutch. As a result of the instability of the Dutch, they won by performance (despite a tie). However, Andersson’s team still lost to the French.

Sweden had to play the playoffs against what seemed to be an impossible opponent – Italian national team. The Swedes decided, however, to bank on the quality defensive play and won – the only goal of the game was from the Swedes.

In the finals, Sweden will have to face off against Germany, Mexico and South Korea. If during the game against the Europeans the spectators will probably have to forget about the offensive play, then with Mexicans and Koreans you can expect some aggressiveness and a few goals scored at least, even without Zlatan Ibrahimović, who’s not going to be with the Swedish team during the World Cup in Russia.

Top goalscorers of the qualification:  Jesus – 7, Neymar, Paulinho – 6 each, Coutinho, Willian – 4 each. 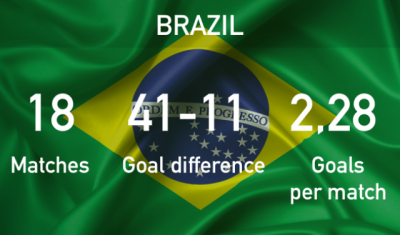 Canarinhos have won the South American qualification round without a hitch, becoming the best team of the continent. The Brazilian team have successfully used many of the goal moments in the qualifying rounds although it won’t be unfair to the competition if we won’t mention that they often were reckless as well.

The Squad is going for the World Cup finals with a traditionally excellent selection of attacking players, who, as always, will attract the attention of the press and fans. Neymar, Jesus and Coutinho will try to repay the praises with excellent moments and big scores.

Top assists of the qualification: Zelinski – 4, Grosicki – 3, Piszczek, Błaszczykowski – 2 each. 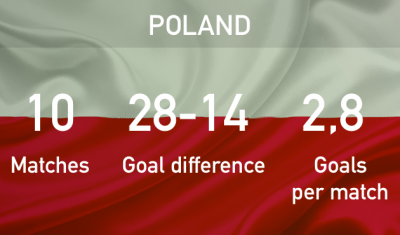 Polish national team became one of the sensations of the qualification round. White Eagles have competently fought their way to the World Cup in Russia, winning 8 games, playing a tie once and losing only once. That brought the Poles the first place in their group and a direct path to the finals.

Polish team has shown a very attractive football, scoring 28 times, however, most of the goals are the work of Bayern striker Robert Lewandowski. This creates a vulnerability in Polish strategy, because if one of their opponents will find a way to block him out, then the Polish team just won’t have anyone to score.

During the World Cup finals, Poland will play against Senegal, Columbia and Japan, which means that the Eagles will have a decent chance of winning. However, it all rests on the preparedness and game form of Robert Lewandowski. 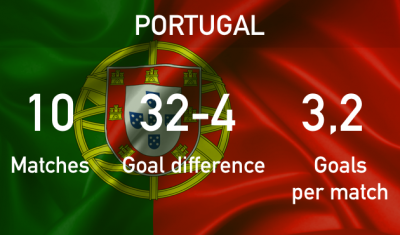 The current European champion was very close to fighting their way into the final of the 2018 World Cup through the playoffs. Portugal at the start of the qualification lost an away game to Switzerland (0:2), after which both opponents were fighting without losses to the end. However, in the end, the Portuguese were able to return the favour to the Swiss, defeating them 2:0 at their home stadium, and due to the better goals scored conceded ratio, Portuguese national team took the first place and got a direct ticket to Mundial.

In offence, Portuguese national team still depends on Real captain Cristiano Ronaldo. He became the best goalscorer during the qualifying rounds, as well as the best assist maker. This deep dependency on one star player may prove to be the undoing of the Navigators, similar to the situation with Polish national team.

However,  there should be no problem with playoffs for the Portuguese. They’re sharing the group along with Spain, Morocco and Iran and while their Iberian neighbours will provide a bit of a challenge, the rest shouldn’t be a problem. 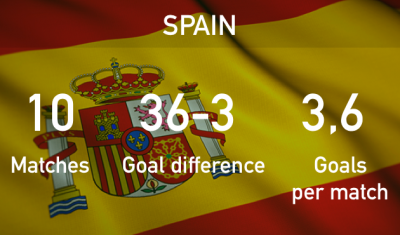 Spaniards were, as always, one of the favourites in the qualifying rounds and they’ve passed them brilliantly. They’ve played against Italy and gave them no quarter. Although the away game was a tie (1:1), the Rojas have completely destroyed the Savoy Blues (3:0).

Spain is favoured by a slew of competent attacking players and does not use a single one as a spearhead. Any forward or midfielder can score for Spain, which makes the team a deadly enemy.

We can say without the reservation that the La Furia Roja will qualify out of their group in the finals but if they’d make it for the Trophy is another matter. They are, however, a very strong contender for the win. 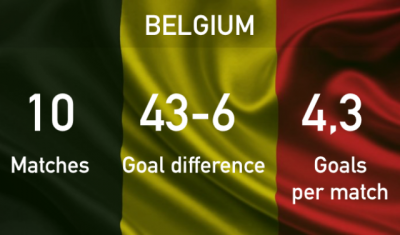 Belgian team, experiencing one of their “primes”, had no trouble qualifying within their group, winning 9 times and having only one tie. Almost every opponent received a veritable basket of goals from The Red Devils. Especially generous were Lukaku, Hazard, Mertens and other star offensive players of the team.

The most memorable game of the qualifying rounds (in our opinion) was the away match against Bosnia (4:3). Both teams have played interesting, offensive football. Both Bosnia and Belgium have had multiple attacking attempts, cornershots, tackles and recoveries.

During 2018 Russia World Cup finals Belgium will have to play against Panama, Tunisia and England. If they the Belgians prepare well, there shouldn’t be a problem for them to become the leaders of their group. They can actually,  potentially, go to playoffs from the lead, which should help to determine their opponent for the quarterfinal.

Top goalscorers of the qualification: Müller, Wagner – 5 each, Draxler, Gnabry, Goretzka, Werner – 3 each. 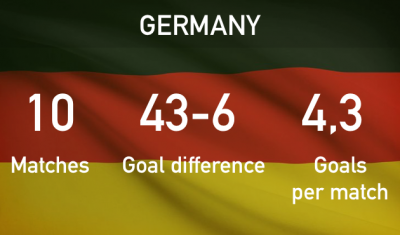 German national football team became the best in the qualifying rounds for the Russia 2018 World Cup. They won 10 matches out of 10, scored 43 times and let others score only 4 times.

We can, of course, point out the level of the teams that the Germans played with during the qualifying rounds but, to give the National Eleven justice, they’ve taken each and every of their opponents seriously and allowed for no goofs. The same September of 2017 victory against Norway (6:0) could be a verification of their serious disposition, despite the fact that everybody knew that they were going to the finals of the World Cup anyway.

The positive side in the playstyle of the Germans is that every player in the team is resourceful and they are not dependent on a star player (or two). The German team, as always, is multifaceted in their skills, which is a very dangerous thing for any opponent. Even before the qualifying rounds, they were considered a main contender for the win and now, the chances are even more likely. Germany may as well be on their way to get their fifth World Championship, elevating themselves to the only team that has ever done so – Brazil.

Information from 777score.ng was used writing of this article.