Six artists Naira Marley, Slimcase, Falz, Simi, Lil Kesh and Olamide all collaborated on the song which has set football fans dancing and celebrating while they have the best of moments with Coca Cola.

According to Nwamaka Onyemelukwe, Head of Public Relations at Coca-Cola, the song reflects the emotions of true football fans and vividly captures the essence of good living which is the value which Coca Cola seeks to promote. 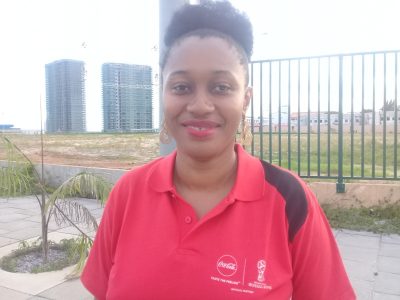 “Coca Cola is the official soft drinks partner of the Super Eagles and what that means is that we have a five year contract to support all the national teams of Nigeria, not just the Super Eagles. For the Super Eagles to qualify and participate at the World Cup, it is a very great moment for us and and that is why we decided to adapt the song. The high moment of every game is when a goal is scored. So we thought of the perfect moment that brings the most excitement and the perfect song to accompany such moment and that’s how we settled for Issa Goal. We wanted to give our customers and Nigerians the best so we brought together about seven of the best musical talents in Nigeria to collaborate on that remix and, even if I’m the one sasying it, it is awesone. Since we did that remix, it became a hit and is now very popular all over the country. A lot of people are excited about it and we see the excitement each time Nigeria play and score at the World Cup. For Nigerian football fans, the song is a sort of victory celebration,” she told completesportsnigeria.com at the Eko Atlantic City viewing centre.

On the idea behind the setting up of viewing centres for fans to congregate and watch live games, she said it was part of the company’s Corporate Social Responsibility to their customers all over the country and it is the largest of it’s kind in West Africa.

She said: “As part of our corporate social responsibility, we have set up as many as 64 viewing centres where fans can go to watch the World Cup and generally have a nice time. Coca Cola is one of the longest-standing supporters and sponsors of the FIFA World Cup. We’ve been collaborating and cooperating and we are partners with FIFA since 1976. Last March, we brought the authentic FIFA World Cup trophy to Nigeria for four days. That created a lot of excitement among football fans and set them in the World Cup mood. We also sponsored some fans, about 22 of them, to the World Cup in Russia to watch the competition. But then, we realised that for a football-crazy country like Nigeria, sending 22 people to Russia is not enough so we decided to bring Russia to them at home and that was what informed the viewing centre initiative which is spread all across the country. It is designed to cater for all strata of society, whether at the grassroots or at the treetop.”

Onyemelukwe further revealed that Coca Cola loves to encourage an active lifestyle and had spared no expenses in bringing the viewing centres to the doorsteps of every Nigerian at absolutely no cost. All that a football fan need to do, according to her, is to just walk in to any of the centres and watch live games on very large screens and experience the feeling of being at the World Cup without actually being in Russia.

She also opened up on the contract between the organization and the Nigerian Football Federation which will run for five years which is aimed at aiding the growth and development of the game in Nigeria.

“We identify with football as a means to promote an active lifestyle. For the past 10 years we have been sponsoring the Copa Coca Cola which has helped to discover several talented players. Super Eagles midfielder Wilfred Ndidi is one of such players and we are happy with that. Today he’s representing Nigeria at the World Cup and also plays for Leicester City in England. You can see that we are getting back into Nigerian football with the agreement we signed last january with the NFF. It’s going to last for five years and we want to identify with every facet of Nigeria football including the domestic league. By the time the contract runs down in five years time, I’m sure that we would have touched Nigerian football positively and made it better than we met it.,” she added.

Onyemelukwe expressed satisfaction with the promotion which she claimed is meeting the company’s objective of setting up the viewing centres.

She said: “For every initiative there are hitches but you learn from them, move on and get better at what you do. At the initial stage there were hitches but we are better off now. It’s all about creating brand love and ensuring that our customers experience a better life. People come here, are very excited and you also see that the game unifies people across all societal divides. It is an activation for our brand and a way to say thank you to our loyal customers.”