Third-tier Wigan Athletic defeated 10-man Manchester City 1-0 at the DW Stadium to book a quarter-final place in the Emirates Cup on Monday.

The Latics, who shocked Manchester City in the FA Cup final in 2013 to lift the trophy, will continue their fairy tale in the competition when they host Southampton in the quarter-finals

Will Grigg scored the only goal of the game, his seventh in the competition, to end Manchester City’s dream of four trophies.

Aguero had an early chance to open scoring in the second minute but his header from Bernardo Silva’s cross sailed over the bar.

Ikay Gundogan was next to go close with a straight shot but his effort was saved by Christian Walton as he dived low to his right to push away the German’s well-struck effort.

Wigan reacted with Grigg latching on to a poor pass from Danilo to John Stones to fire
into the side netting.

Fernandinho and Aymeric Larporte had chances to break the deadlock in the first half but missed.

Fabian Delph was sent off at the end of the first half for a rash tackle on Max Taylor. 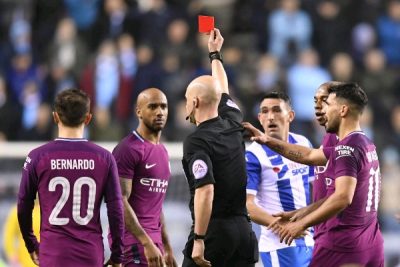 And in the 79th minute, an awful mistake from Kyle Walker allowed Grigg straight on goal to beat Claudio Bravo with a low drive.

Manchester City now have three trophies to battle for till the end of the season.