Yusuf: DR Congo Clash Not Do Or Die Affair By Bamidele Boluwaji:
Super Eagles assistant Coach, Salisu Yusuf says that the international friendly match between Nigeria and DR Congo is not a do or die affair, so Nigerians should not be under any pressure, Completesportsnigeria.com reports.

The former Enyimba handler who spoke to Completesportsnigeria.com
ahead of the match scheduled to hold on Monday in Port Harcourt, said he was sure it would help the Super Eagles to boost their preparation for the 2018 FIFA World Cup in Russia.

“It is a friendly match and it is not a do or die affair,” Yusuf who led the Super Eagles’ B team against Atletico Madrid in Monday’s game in Uyo told CSN. 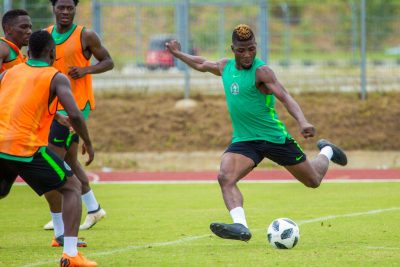 “The players know that there is nothing at stake in the match and for us the Coaches, it is just a continuation of our preparations for the World Cup.

“Nobody should be under any pressure, we are playing DR Congo for us to bring the players together and to know the fitness level of the players after the European season.

“This is also an opportunity for the fans, I mean Nigerians to see the team before we move to Russia.”

Yusuf who is looking forward to a good outing in Russia said he was impressed with the Super Eagles turnout in Uyo, and that all the players are looking good and ready for the World Cup next summer.

“Almost all the players are in camp except Moses who has also taken permission, and what this means to us is that we are on course for the World Cup.

“The turnout was quite impressive and they are all looking fit and ready for the World Cup,” Yusuf further told CSN.

“We are hoping to have a good outing in Russia and from the way we have started and the programme we have for the players, I strongly believe that we are going to do well.”

After the match against DR Congo, the 2013 African champions will play the Three Lions of England at the Wembley Stadium on June 2.

The Super Eagles will thereafter enter into the final phase of camping in Austria and the final 23-man squad will prosecute their last pre-World Cup international friendly match against Czech Republic on June 6 before heading to their World Cup team-base camp in Essentuki, Russia.