Super Eagles assistant coach, Salisu Yusuf, could be facing the wrath of FIFA, CAF and the Nigeria Football Federation (NFF) if found guilty after he was caught on camera taking cash from men posing as football agents.

The footage captured by controversial journalist Anas Aremeyaw Anas in September 2017 – and has been broadcast for the first time by BBC Africa Eye.

He was further promised 15% by the men posing as football agents of the players once they are able to seal a deal abroad.

In the the video clip posted online by the BBC, Yusuf was handed the cash with the agent saying,“ So if anything goes through and these players are able to get their contracts, you will get 15% of that contract,” one of the reporters posing as an agent told Yusuf to which he replied; “they will be in CHAN.” 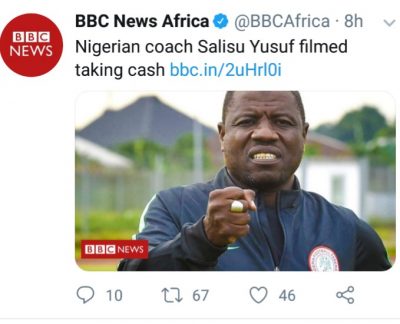 ​“You know in football it is supposed to be consistency and form,” Yusuf added.

The 56-year-old coach has also denied any wrongdoing, insisting that he did not promise or committed to selecting any player.

He also claimed that he never asked the reporters for money and that it was just offered to him. The coach also clarified that he received $750 not the $1000 claimed in the report.

He also claimed that he viewed the money as a trivial and symbolic value which falls within the gifts FIFA code allows for and that his influence over the players’ selection was never affected.

He also believes that he was never in breach of FIFA or NFF ethics code.​