Odegbami: Nigerian Football Grounds – The Revolution May Be Here, At Last!!! 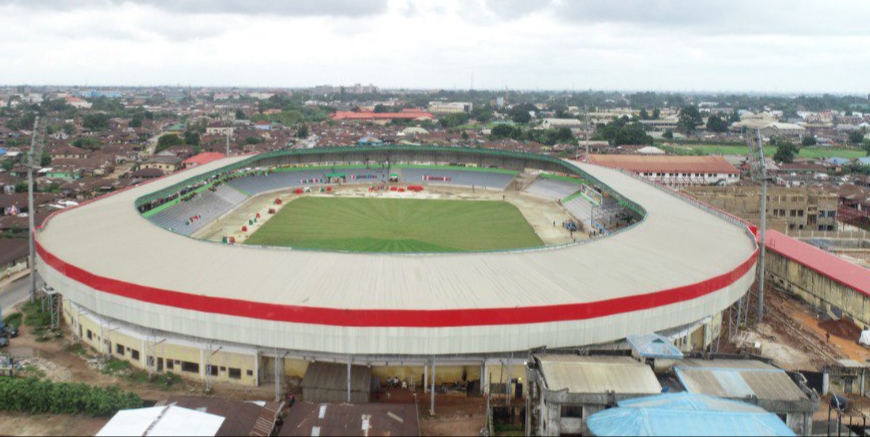 The football ground is on my mind this day.

I watched an under-reported news item on one of the television channels a few days ago that lifted my spirit. Our football may be about to enter a new and exciting phase in its growth. We may be waking up from our long slumber in the development of football and its business in Nigeria by focusing attention on the football grounds in major stadia around the country!

I watched grounds men planting natural grass on the football field of the Adokie Amiesimaka Stadium in Port Harcourt. That will be the home ground of the Rivers State government sponsored Sharks Football Club of Port Harcourt from the next football season. Great news.

With snippets of similar developments in a few other places, I am excited and returning to the ‘boring’ subject again, for the umpteenth time, in my newspaper columns.

Natural grass is the key to the best football and to the growth of the football business!

It is that simple and almost too good to be true that such a small ‘step’ by clubs and governments in the country could become a giant ‘leap’ for football in Nigeria.

The quality of the football field has always been everything in football to me. Why it is always under-rated and most neglected baffles me when the evidence of its critical importance to producing the best football is all around us, in every great football match that is being played on the planet. Its failure has plateaued the growth of football in Nigeria for many decades and hampered its transition into big business.

So, every major football stadium where matches are to be played has a very good ground otherwise it becomes an eyesore. The seats in the terraces matter, but are secondary. The size of the stadium and the external architectural beauty are also good for advertisement and comfort of spectators but they have no direct impact whatsoever on the quality of the football played on the field.

The Coronavirus pandemic has revealed that the best football can still be played without spectators, watched on TV and enjoyed by billions of people all over the world. The lesson from this is that the greatest attention should be paid to providing the best grounds on which the best matches can be played and great television coverage. The final match of the 2020 European Champions league will be played in Lisbon, Portugal. It will be played in an empty stadium, yet the whole world is expected to watch the ‘match of the year’ between the two best teams in Europe this season – Bayern Munich FC of Germany, and Paris Saint-Germaine of France.

As the world prepares for this entertainment finale one thing that is certain is the surface on which the match will be played. It will be natural grass, flat, well-cut, very lush and very green. There is no compromise. There will not be even the slightest hump or indentation that could affect the flawlessness of the conduct of the encounter.

Whilst everyone is bracing up in anticipation of a night of supreme entertainment, behind the scene, dozens of grounds men are at work nursing the natural grass on the Estado do sport Lisbao e Benfica like a new born baby, overseeing the watering of the grass three times a day with electronically controlled and synchronized water sprinklers, aerating the ground to allow the grass to breathe and to have fresh air, cutting the grass in patterns to an inch-perfect specific height with motorized lawn mowers that are equipped with special tires that will not damage the grass, covering every inch of the football field on foot handpicking the tiniest weeds blown there by the wind or carried there by birds. The work is meticulous from dawn to dusk every day until match day and time! Such is the level of attention paid to every football ground of every major football club all over Europe. The science to make it even better is unending!

That’s why week-in, week-out, people can sit in the comfort of their homes and pay high subscription fees that fuel the football business to watch matches from Europe. That’s why the business of football is booming in Europe. It is for that same reason also that matches coming out of Africa are not such a big attraction around the world. That’s why Nigeria’s domestic football matches are not a big attraction for anybody, including Nigerians. Yet, television provides the bulk of the money in the sports business! Without television, the football business will NEVER grow. And without first-class fields, television is an eye-sore.

So, the key to football development, to the football business, to television coverage, to large audiences, lies in the quality of the football field. This conclusion is hard to fully appreciate, but is absolutely true, nevertheless.

The turf is a most important aspect of any football match. The better the ground, the better and more meaningful the training sessions. For coaches, all the skills a player can learn and exhibit, all the team tactics and a strategy that can be rehearsed and executed on the field, can be at their best levels if a ground is flat with lush green grass.

All Grade A international matches are played on natural grass fields. A small bump in the field that could create an unearned advantage to either team during a game is unwanted.

To achieve this level of field quality requires paying special attention to the minutest details.

This guarantees that the huge sums paid by sponsors to be a part of transmitted matches are justified by the best performances.

The size of stadia, the quality of the seats in the terraces, the condition of the state-box seats, the number of hospitality suites, number of camera’s covering a match, and so on and so forth, are all important too, but remain secondary! The turf, the theatre of the drama, is King!

It will take fixing all our stadia for a true revolution to start and genuine growth of the football business (and by extension, sports business) to take place in Nigeria.

That’s why I am very excited about the recent buzz about developments around the country concerning some football stadia.

I hear there is a new hybrid technology of artificial grass that is close but not quite as good as natural grass. Many stadia are adopting it. From the testimonies of some footballers about its efficacy and friendliness to the feet, this type of surface would be good for club grounds and national league matches. But the main stadia for the biggest international matches must still remain natural grass planted by experts (there are only a handful in Nigeria) and maintained professionally.

The Onikan Stadium, in Lagos has been reconstructed into a modern stadium. It has a Hybrid grass turf.

The Samuel Ogbemudia Stadium in Benin has been reconstructed and the playing turf is lush green natural grass. It shall be the home ground of Bendel Insurance FC of Benin.

Enyimba football club of Aba also has a newly installed hybrid turf in the Enyimba Stadium.

The MKO Abiola Stadium in Abeokuta has excavated its previous Astro-turf surface and now has natural grass. That will be the home ground of Gateway Football Club of Abeokuta.

In Ibadan, the remodeling of the Lekan Salami Stadium in Adamasingba has started. It is likely to have a natural grass surface. It is the home ground of Shooting Stars FC. I hear it is also going to have a natural grass field. That is the only good news. In the case of Ibadan, however, I still cannot wrap my head around the fact that the project would cost the State government a whopping 5.2 Billion Naira.

With a fraction of that sum, take back Liberty Stadium from the federal government, do a facelift for it as well as for the Lekan salami Stadium, plant the best natural grass fields in both facilities, restore the functionality of other sports facilities in them, and use the bulk of the money in fixing the several deficits in education and health in the State. This grass field revolution may actually have started.

Meanwhile, I can’t wait for Sunday night to come. My head tells me it’s Bayern Cup to lose. My heart wants PSG with Neymar and Mbappe to create history and win their first ever European Club championship!