By James Agberebi:
Super Eagles striker Kelechi Iheanacho scored his first ever goal for Leicester City who came from a goal down to beat Championship club Leeds United 3-1 in the fourth round of the Carabao Cup on Tuesday night.

The goal was his first competitive goal at club level after scoring his last goal back in March this year for Manchester City in a 5-1 win against Huddersfield Town in the FA Cup.

In the 70th minute, Algeria striker Slimani made it 2-1 off an Iheanacho assist before compatriot Riyad Mahrez scored to make it 3-1 on 88 minutes.
Incidentally, Nigeria and Algeria Will meet in a World Cup qualifier in November. 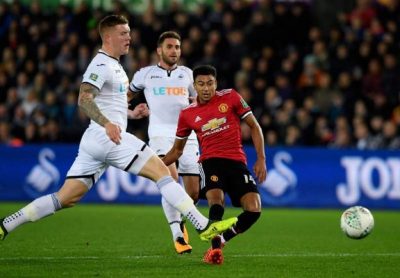 And at the Liberty Stadium, holders Manchester United defeated Swansea City 2-0 thanks to aJesse Lingard brace.

Lingard opened scoring for United in the 21st minute before adding a second in the 59th minute.