FC Bayern maintained their one-point lead over second-placed Leipzig after scoring three goals in the opening 12 minutes of their 4-1 rout of 1. FC Köln at the weekend. Robert Lewandowski was on the score sheet for the 23rd time this season, and will fancy his chances of adding to his league-leading tally against the second-most porous defence in the division (47 against). Serge Gnabry and Kingsley Coman are also back among the goals, with Hansi Flick’s charges unbeaten in eight since losing
back-to-back matches to Bayer 04 Leverkusen and Borussia Mönchengladbach.

Dortmund begin the Bundesliga weekend in third, fuelled by their very own free-scoring forward line. Erling Haaland made it eight Bundesliga goals in five games with his strike in the 4-0 drubbing of Eintracht Frankfurt, while Jadon Sancho became the first player since Pierre-Emerick Aubameyang (2017) to score in six successive home league games. Haaland was at it again midweek, grabbing a match-winning brace
in BVB’s UEFA Champions League last-16 first leg against French Ligue 1 champions Paris Saint-Germain. 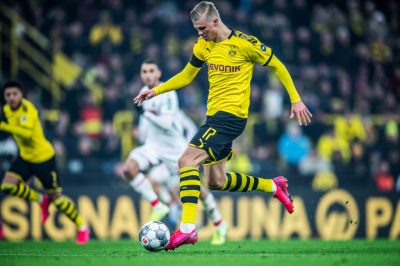 A Bremen team occupying the relegation play-off spot in the Bundesliga table should be easy pickings for Lucien Favre’s men, but the Green-Whites have a habit of upsetting the Dortmund applecart. The evergreen Claudio Pizarro dealt the Black-Yellows’ title hopes a serious blow late last season in a topsy-turvy 2-2 draw at the Weser-Stadion, and it’s only a couple of weeks since they dumped Dortmund out of the DFB Cup in the round of 16.

Leipzig made no such mistakes after brushing aside Bremen to the tune of 3-0 last weekend. The result ended a four-match winless run, though the fact Die Roten Bullen are still only a point behind Bayern illustrates what a force they have become under Julian Nagelsmann this season. Leipzig are the only team to shut out Bayern this Bundesliga term after all – and won 1-0 away to English Premier League club Tottenham Hotspur in the Champions League on Wednesday, courtesy of Timo Werner’s 26th goal of the season in all competitions. It is nevertheless with some trepidation they travel to Gelsenkirchen, acutely aware it was Schalke who ended their unbeaten
start to 2019/20 back on Matchday 6. Gladbach can keep the pressure on the trio of sides above them if they can build on their Rhine derby victory over Fortuna Düsseldorf, when they host TSG 1899Hoffenheim. Leverkusen are also creeping into the equation, with Kai Havertz hitting his straps at just the right time. The 20-year-old is fresh off becoming the third youngest player in history to reach 50 Bundesliga wins, marking the occasion with his third league goal of 2020 in the 3-2 triumph against 1. FC Union Berlin. FC
Augsburg are next on the agenda.

Dusseldorf travel to SC Freiburg, second from bottom and searching for their first Bundesliga win of the Uwe Rösler era. Near-neighbours Köln, meanwhile, head to the German capital to face a Hertha BSC Berlin outfit still too close to the drop zone
for comfort.

VfL Wolfsburg have lost to Köln and Hertha since the turn of the year, but go into their home meeting with 1. FSV Mainz 05 on the back of a three-match unbeaten run. Wout Weghorst is also firing again after ending a seven-game lean patch with a hat-trick in the Wolves’ 3-2 win over Hoffenheim.

Matchday 23 comes to a close when Frankfurt take on Union Berlin, separated by just two points mid-table. The Eagles had three wins under their belt since the winter break prior to their chastening 4-0 defeat in Dortmund, while Union – despite
defeat to Leverkusen a week ago – are edging ever closer to a second successive season of Bundesliga football.