Top 10 Most Expensive Football Players In The World: Is Messi Not Ranked 1st? He is a Senegalese footballer who plays for the Liverpool club in the Premier League and the Senegal National Football Team.

Known as the “Lion’s Heart Teranga” (from his native Senegal), he is one of the best players in the world today. Antoine is a French professional footballer who plays for the Barcelona club. He is also the owner of the top scorer of European Football Championship 2016. The Belgian is currently playing as a midfielder for the Manchester City club in the Premier League and the Belgian national team.

He is one of the best players in the world today and is the best-attacking midfielder in the world in 2019 according to ESPN (Entertainment and Sports Programming Network). Raheem Sterling is a Jamaican-English professional footballer and is playing for the Manchester City club.

Sterling is a young and talented Manchester City player/ Ph.baomoi.com

Looking back on Raheem Sterling’s achievements in the Man City shirt in the 2018/19 season, he and the Manchester team won the domestic trebl

e under the guidance of coach Pep Guardiola. And he also had a great season of scoring 25 goals in all competitions – the most in his career.

Lionel Messi is one of the best players today/ Ph.bongda24h.com

The fact that he is not the most expensive player today surprises and regrets for many people. Eden Michael Hazard is a Belgian footballer who currently plays as a striker for the Real Madrid club in La Liga as well as playing for the Belgium team in team level tournaments.

He is the captain of the Belgian team. Eden Hazard is also one of the best players in the world right now.

Hazard possesses excellent technical skills, high speed, dribbling, dribbling, and good finishing from the age of 20. Therefore, Eden Hazard is compared such as: “New Cristiano Ronaldo”, “Little Messi”, and even “Zidane’s heir”, those are the words that the world public is favouring for Eden Hazard. Mohamed Salah Ghaly is an Egyptian footballer who currently plays as a winger for the Liverpool club and a member of the Egyptian National Football Team.

Nicknamed “Pharaon”, he is considered one of the best players in the world today. Mohamed Salah is known for his ability to finish, dribble and speed. On the other hand, he is also the best Egyptian player of all time.

Salah went on to break the Premier League’s scoring record in a 38-match season, receiving the Premier League Golden Boot after scoring 32 goals in 36 matches. Salah’s performance helped him receive a number of individual awards, including the PFA Player of the Year.

Mohamed  Salah was voted by Time as one of the 100 most influential people in the world in 2019 and one of the six stars on the magazine cover. Harry Edward Kane is an English professional footballer who currently plays as a striker for the Tottenham Hotspur club and captain of the England national team.

At the 2018 World Cup in Russia, he earned the individual title of Golden Boot for Top Scorer with 6 goals scored. He was also voted as the Young Premier League Player of the Year. (2015). With 53 goals in 83 matches for Brazil since making his debut at the age of 18, Neymar is the fourth-highest scorer of the Brazilian National Football Team.

Known for the ability to dribble, score, and play both feet well, Neymar has been compared to former Brazilian striker Pelé and Santos. On the pitch, he is one of the most famous athletes in the world. 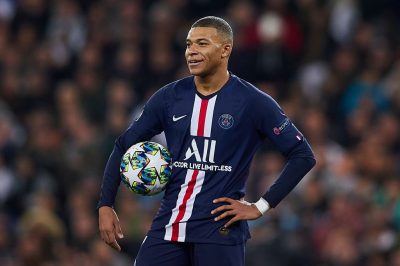 Kylian Mbappé is a Cameroon-Algerian French footballer who plays as a striker for the Paris Saint-Germain club in Ligue 1 and the French national football team.

The most expensive player in the world today- Mbappé/ Ph.hanoifc.com.vn

He is the youngest player in French football history to score in the World Cup arena. In 2018, he received the FIFA Young Player of the Year award. At the end of the 2018-2019 season, he came second in the race to win the European Golden Shoe after Lionel Messi. In 2019, he was voted the best plug striker in the world by ESPN and FIFPRO.

He is also a very technical player, Mbappé is known for his excellent dribbling ability, as well as explosive acceleration, agility and creativity when having the ball.

The change of ball speed or sudden change of direction to beat the opponent in any situation made it easy for him to score against the opponent’s net. He was also compared to being a track because of his very good physical ability.

Above is a list of TOP 10 most expensive players in the world today. We hope this article will satisfy you.