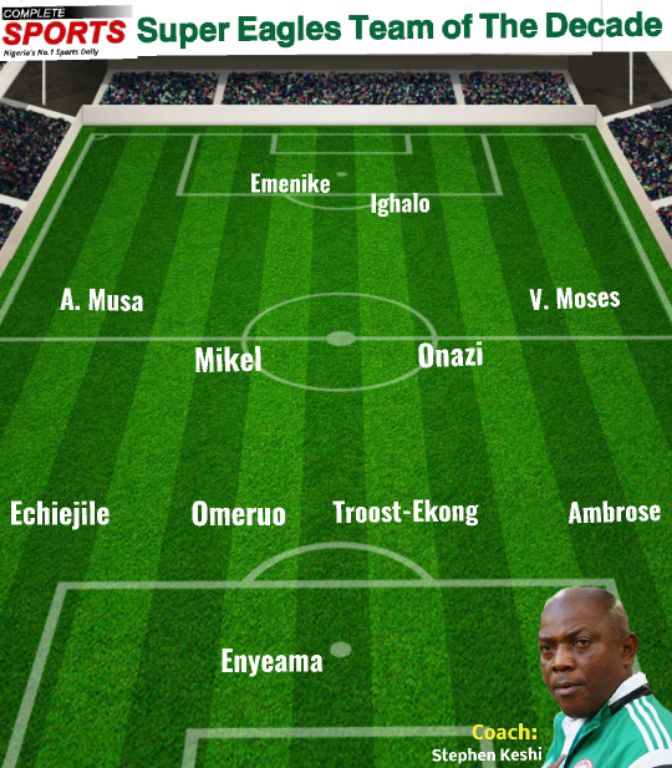 The conclusion of the year 2019 marked the end of another decade in which Nigerian football went through a lot of ups and downs.

From the year 2010 up until last year, the Nigerian senior male national team gave the country a lot to cheer about and also a few things to worry about. Vincent Enyeama is without doubt Nigeria’s best goalkeeper of the recently-concluded decade, having held down the Super Eagles’ number one position from 2010 to 2015 until a dispute between him and former manager, Sunday Oliseh.

Enyeama was actually a member of the Nigerian national team from 2002 until October 2015, serving as captain from 2013 until his retirement from international football. With 101 caps, he is Nigeria’s most capped player of all time.

In the 2009/2010 season, Hapoel Tel Aviv won the Israeli league and cup double with Enyeama featuring prominently. He scored a goal in the Cup final but missed a penalty in the last fixture of the year which Hapoel eventually won by scoring in the 92nd minute, thereby capturing the league title.

On 18 August 2010, he scored his first goal of the 2010–11 season with a penalty against Red Bull Salzburg in the Champions League qualifiers. Hapoel also won the Israeli cup again.

Enyeama left French side, Lille on a one-year loan deal with Maccabi Tel Aviv in 2012 and went on to win the Israeli championship title.

During the first half of the 2013–14 season with Lille, the 37-year-old shot-stopper kept eleven straight clean-sheets in French Ligue 1 matches.

He also came within 114 minutes of equalling Gaëtan Huard’s Ligue 1 goalkeeping record, set in 1993 of playing 1,176 minutes without conceding a goal.

Enyeama made his second FIFA World Cup appearance in 2010 in South Africa where he was named man of the match in Nigeria’s first game, making six fine saves against Argentina, four of them from Lionel Messi.

At the 2013 African Cup of Nations which also took place in South Africa, Enyeama deputized for regular captain, Joseph Yobo and led Nigeria to its third continental title, keeping a clean-sheet in a 1–0 win over Burkina Faso in the final.

Enyeama made Nigeria’s squad for the 2014 FIFA World Cup in Brazil and helped the Super Eagles reach the knockout stages for the first time in 16 years.

William Troost-Ekong made his senior international debut for the Super Eagles of Nigeria in 2015 after playing 90 minutes in
an African Cup of Nations qualifier against Chad.
Born in the Netherlands into a mixed Dutch and Nigerian family and being eligible for both Netherlands and Nigeria in international football, he opted to represent the latter.

Also Read: The Emerging Trend of eSports; Legal Considerations And The Nigerian Perspective

The rock-solid central defender was part of Nigeria’s squad to the 2018 FIFA World Cup which took place in Russia and was also a vital member of the team that won bronze at the 2019 AFCON in Egypt.

Troost-Ekong appears to have had a perfect understanding with Leon Balogun in the heart of the Super Eagles’ defense but in recent times, he has struck a great partnership with Omeruo which looks set to last for at least the next five years.

On 9 January, 2013 at the very young age of 19, Kenneth Omeruo made his Super Eagles debut in a goalless draw against Cape Verde in the African Cup of Nations which was hosted by South Africa.

The central defender thereafter went on to play in all of Nigeria’s matches at the 2013 AFCON as Nigeria went ahead to cart home the continental trophy for the third time.

Omeruo also starred in all of Nigeria’s three group games at the 2013 FIFA Confederations Cup. The ex-Chelsea centre-half started all four games which Nigeria played at the 2014 FIFA World Cup.

He scored his first goal for the Super Eagles in a 1-0 victory against Guinea in the 2019 African Cup of Nations and was a key part of the team that went on to clinch the bronze medal in Egypt.
At club level, though, Omeruo never got to settle down at Chelsea who sent him out on loan until last summer when he joined Leganes on a permanent deal. Still only 26, Omeruo seems to have been around for ages. It is surprising to note that Efe Ambrose actually started his football career as a central defender despite excelling as a right full-back for the Super Eagles and the plethora of clubs he played for.

Ambrose played a key role when Nigeria won the 2013 African Cup of Nations in South Africa and was also involved in back to back tournaments which held in Brazil (2013 FIFA Confederations Cup and 2014 FIFA World Cup).

From 2012 that he moved to Scotland, he won five league titles in a row. At Celtic, Ambrose won the league title four straight times and after joining Hibernian in the Scottish second tier, he also won the Championship title.

The tall player did not even stop at that after picking up the Scottish Cup in the 2012–13 season and the Scottish League Cup during the 2014–15 campaign both with Celtic.

Elderson Echiejile started every game for Nigeria when the Super Eagles picked up their third African Cup of Nations title in South Africa in the year 2013 which was certainly the team’s greatest achievement of the decade.

The left full-back also found the back of the net on one occasion in that very tournament, netting the West Africans’ opening goal in a 4-1 demolition of Mali in the semi-final.

Echiejile featured twice at the 2010 World Cup but unfortunately missed out in 2014 through injury. The former Monaco defender was also never on the losing side in 18 World Cup qualifiers (13 wins and five draws). The best and most consistent Nigerian football player of the just-concluded decade, John Mikel Obi played at the highest level and won every trophy available in club football.

The other trophies the former Super Eagles skipper won during his days with the Blues are the FA Community Shield in 2009, UEFA Champions League in 2011–12 and Europa League in 2012–13.

Mikel moved to China with Tianjin TEDA in 2017 and after two years, he returned to England on a short-term deal with Middlesbrough before joining Trabzonspor on a free transfer in July 2019.

In a 14-year international career between 2005 and 2019, he played 88 times for Nigeria, scoring six goals. At the 2013 African Cup of Nations, Mikel was a key player for Nigeria as they went on to win their third title.

In July 2019, he said that the 2019 AFCON which held in Egypt would be his last tournament for Nigeria. He retired at the end of the competition in which Nigeria came third.

Ogenyi Onazi just like Omeruo got into the team as a green-horn for the 2013 African Cup of Nations in South Africa and by the time the tournament had ended, he had kept the defensive midfield position for himself.

He was one of Nigeria’s better players at the 2014 World Cup which was hosted by Brazil and remained a regular in the team until the 2018 World Cup where he was an unused substitute.

Onazi was expectedly left out of the national teams provisional squad to AFCON 2019 after failing to fully recover from an Achilles injury suffered in December 2018 while playing for his club in Turkey.

The beginning of the decade saw the emergence of an exciting midfielder/winger, Victor Moses who caught the eyes with his performances for Wigan Athletic in the English Premier League.

He secured a transfer to Chelsea where he made ten appearances as they won the Europa League in the 2012/2013 season. It took him three seasons before he could feature for the Blues again.

That season under Antonio Conte, Moses took up the position of a wing-back impressively to help Chelsea to a Premier League title win and an FA Cup trophy the following term.

His Super Eagles debut was an exciting moment for Nigerians who were happy to have had the player switch his allegiance to the country after playing at the youth levels for England.

He was one of Super Eagles best players as the Nigerian national team won the 2013 African Cup of Nations title in South Africa and was duly named in CAF’s Best XI of the tournament.

Moses played for Nigeria at the 2014 and 2018 FIFA World Cups and after the Mundial in Russia, it was announced by Moses on 15 August, 2018 that he had retired from international football. Current captain of the Super Eagles and a veteran of two World Cups and two Nations Cup. Four World Cup goals, an African Cup of Nations title and bronze medal are just enough for Musa to register his name in this auspicious list of top eleven performers in the hallowed Green and White jersey for the decade under review.

Musa’s performances for Nigeria are quite peculiar, he has seldom thrived in continental competitions but has been the Super Eagles’ top man at the last two World Cups.

He netted two really good goals in an unfortunate 3-2 defeat by Argentina in 2014 and repeated the trick against Iceland last year by scoring another fine pair of strikes in a 2-0 win.

While his brace wasn’t enough to take Rohr’s side through, the 27-year-old has somewhat made himself the nation’s unofficial go-to guy at World Cups in this decade.

Emmanuel Emenike did not spend much time as a Super Eagles player but made his presence felt with important contributions from the year 2011 to 2014.

He emerged as the top-scorer at the 2013 African Cup of Nations and scorer of crucial qualifying goals for the Super Eagles en route to the 2014 FIFA World Cup in Brazil.

On 20 October 2015 he announced his retirement from international level. At club level, the striker won the TFF First League title with Karabukspor in 2009–10, the Turkish Super Lig (2013–14) and Turkish Super Cup (2014) with Fenerbahce. Odion Ighalo made his debut for Nigeria in the year 2015. He represented the nation at the 2018 World Cup and the 2019 African Cup of Nations, finishing the latter tournament in third place and being crowned top scorer.

For the striker, though, his turnaround in the green jersey in the months after the World Cup in Russia was somewhat unexpected.

His goals return was criticised and the vitriol after his gilt-edged miss against Argentina in the country’s final group game was beyond embarrassing.

However, the Shanghai Shenhua forward rose above the abuse to finish as the top-scorer at the 2019 AFCON qualifiers with seven goals before following that up with five strikes in Egypt as top-scorer.

Ighalo retired after the competition, thus following the adage to quit when the ovation is loudest.